Many designers will tell you that great ideas are built upon the concepts and creators that came before them.  This month we are highlighting a few of the earliest innovators who paved the way for today’s interior design professionals.  Although there were certainly others who came before these few we’ve highlighted here (in fact, some sources trace interior design all the way back to ancient India), the following individuals have been heralded as some of the earliest American influencers for what has evolved into the contemporary interior design profession. 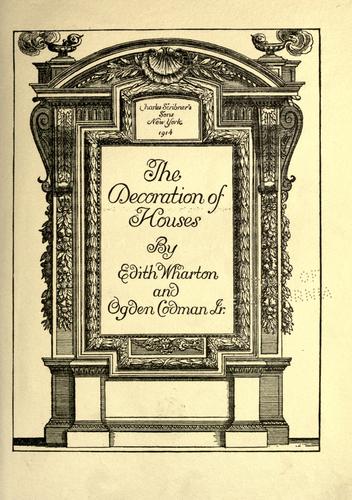 Better known as a novelist, Edith Wharton also had a keen interest in architecture and interior design.  The author of 40 books in 40 years, including The Age of Innocence, Ethan Frome, and The House of Mirth, also authored several works on architecture, gardens, interior design, and travel. One of her early published works was in 1897 at the age of 30 when she co-authored The Decoration of Houses with architect Ogden Codman. Her motivation for this earliest of interior design guides was the excess she observed while living in Newport, Rhode Island. The newly rich families flocking to the New England resort towns at that time tended to flaunt their wealth with conspicuous excess prompting Wharton and Codman to write a book about how to build and decorate houses “with nobility, grace, and timelessness.” Soon after publication of The Decoration of Houses, she and her husband had the opportunity to put many of her design principles into action when working with Codman to remodel their own summer home, The Mount, which today operates as a tourist destination and event venue.

Perhaps further impetus was the fact that Wharton was born a Jones, a New York society family whose indulgences, architectural and otherwise, reportedly led to the coining of the phrase “keeping up with the Joneses.” Wharton and Codman were hoping to educate others, encouraging construction of beautiful, yet practical pleasing residences with appropriate detailing, “from meaningful moldings to efficient floor plans to well-made, well-mannered furniture.”

“I opened the doors and windows of America, and let the air and sunshine in.”

Elsie de Wolfe’s first interior design venture was her own home, which she shared with her partner Elisabeth Marbury.  The success of the decluttered and airy design departure from the prevailing Victorian style of her day led to her first “real” commission which was another first – a women’s only social club.  The Colony Club, designed by architect Stanford White who was a proponent for de Wolfe receiving the interior design commission, was built in 1905 on Madison Avenue in New York City.  This success of this project, along with her society connections and reputation as an actress, led to commissions for well-known names such as Conde Nast, Frick and Hewitt.  De Wolfe also wrote a series of articles for Good Housekeeping and the Delineator which were then compiled into a book, The House in Good Taste which was published in 1913. Her designs often incorporated mirrors, chintz, wicker, and trellis work motifs.

De Wolfe is also credited with popularizing faux-finish treatments such as trompe-l’oeil effects in wallpaper and animal print upholstery. Her pioneering style, eschewing the heavily ornate Victorian order of the day in favor of brighter and more sophisticated, straightforward concepts, is still respected today.

“. . . Albert and I understood that innovation is often the ability to reach into the past and bring back what is good, what is beautiful, what is lasting.”

The career of Dorothy May Kinnicutt, whose childhood nickname eventually replaced her given name, began with the 1929 stock market crash when her husband’s and father’s fortunes and stockbroker careers plummeted along with the market.  Despite the fact she had never received a high school diploma and had reportedly never read a book on decorating or served any kind of apprenticeship, Parish opened her own interior design shop in Far Hills, New Jersey. Her new office, measuring 14 feet by 14 feet, was outfitted with wicker furniture.

From this rather inauspicious start, Parish’s subsequent career success spanning six decades evolved into the noted decorating firm of Parish-Hadley Associates, based in Manhattan. Her successful partnership with Albert Hadley lasted 30-plus years, until her death in 1994.

Most notably Parish had a relatively brief and apparently rocky client relationship with none other than Jackie Kenney and was the first practitioner brought in to decorate the Kennedy White House.  She was replaced fairly quickly by the French interior decorator Stéphane Boudin, however Parish’s influence can still be seen at the White House, particularly in the Yellow Oval Room.

Mrs. Parish is widely considered to have originated American country style in the 1960’s, based on her inclination for ticking stripe, glazed chintz, quilts, hooked rugs, and overstuffed armchairs. While Parish’s designs were warm, and inviting, her approach was apparently brusque and exacting. Her typical assessment of a client’s space before she started any design project involved rolling a tea cart around the room, editing out any items that didn’t meet with her approval. According to a New York Times article at the time of her death, Parish’s six decades of decorating epitomized the rise of women in her own and other professions in 20th-century America.

“Never less, never more . . . design is about discipline and reality, not about fantasy beyond reality.”

Despite his modest roots as the son of a farm-implement dealer, born outside of Nashville, Tennessee, Albert Hadley was known as the designer for the “who’s who” of his time including the Rockefellers, Astors, Gettys and Mellons. His impressive design career lasted until his death at the age of 92 in 2012.   Following two years of college in Nashville, Hadley was employed as a junior assistant to a prominent local decorator, initiating his career focus on high residential style.  Following a stint in the Army and with the assistance of the GI Bill, he was able to attend the Parsons School of Design in New York in 1947.  This led to a teaching job and subsequent employment at McMillen, the most prestigious decorating firm in the country at the time.

Finally, in 1962, he joined forces with Sister Parish. He became a full partner two years later, and according to the New York Times, “their collaboration, playing on strong opposites, became one of the most productive and distinguished in American interior design, continuing until Mrs. Parish’s death in 1994.”  In contrast to his partner, Hadley was known for his ordered precision and careful, deliberate approach.

For those who would like to learn more, here is a sampling of articles we’ve found about each of these fascinating innovators:

Appreciating Edith Wharton’s Other Career, from The New York Times.

Elsie de Wolfe, The Colony Club, and the birthplace of American Design, from Curbed.

The Enduring Hadley of Hadley-Parish Design. from the New York Times.