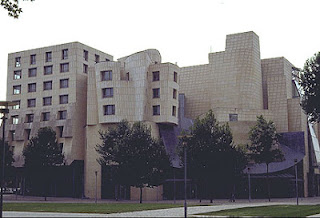 While in college, I was lucky enough to study in Italy for a semester.  It was one of the defining experiences of my life (I found my wife there, too).  However, at the end of my studies in Italy, I was able to backpack to several other counties on the train.  I loved Italy, but while many aspects of Italian life are “modern”, their architecture is relentlessly classical.  On the train ride it was obvious that the further north we got, the more modern the buildings were.
Paris had a scale and a blend of styles that I had not seen in months.  As a young student, I made it my mission to see as many “famous” buildings as possible with the time I had.  One stop I had to make was the American Center in Paris, designed by Frank Gehry.  At the time, Mr. Gehry had little of his public acclaim earned by his later Guggenheim commission in Bilbao, Spain.  He was; however, quite well know in architectural circles.  The American Center was his largest and most famous commission to date, and I had to see what all the fuss was about.
The building was not located anywhere near the center of the city, but on the outskirts along the river with many other modern buildings I could only assume were corporate office buildings.  The façade was not as pristine as it had been in the magazines, either.  It was dirty and several of the thin, stone veneer panels were kicked in, exposing the insulation behind.  I thought maybe that the French were none too pleased with this American presence in Paris (I will dispense with the comparisons to the much different attitude in Paris during 1944).  However, the building was anti-contextual, taking no cues from the surrounding environs.  The sweeping and curved forms related to absolutely nothing I could see from my vantage point.  I couldn’t imagine how that exterior translated into any kind of reasonable interior.
When I entered the main lobby, I found that most of the curved exteriors were part of a vast and complex atrium.  Then I noticed that there was hardly any one in there with me.  Come to think of it, I still don’t know what the main function of that building was.  I snooped around as much as I thought I could without getting cursed at in French.  The most telling investigation came when I found a bathroom.  I couldn’t open the door to the 90 degree position.  I found the obstruction to be the toilet itself.
I left feeling a bit jaded.  This exorbitantly expensive and controversial building had failed to deliver.  I’m not saying I kicked in any stone panels on the façade, but I now understand why there were so many.  A year later I learned that the Center went bankrupt and closed it doors, at least they closed them as tightly as they could given any obstructions.

Full Disclosure:  When I wrote this, the building was still standing vacant, as it did for 9 years.  Since, however, the building was rehabilitated into a center of history of cinema, with very little change to the outside.