This is the third article in a series focusing on Henry Y. Shaub, an architect who had a lasting impact on Lancaster County. 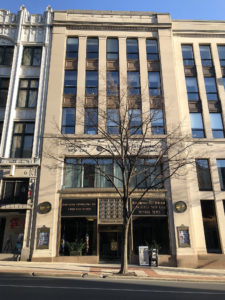 There remains an unwritten rule in the world of architects:  Never work for family!   However, there are always exceptions to every rule and Lancaster architect Henry Y. Shaub broke that rule in 1929 when he agreed to design a new façade and interior for his younger brother’s burgeoning shoe business on North Queen Street.  Henry and Benjamin’s father, John Shaub, started the shoe business in 1880 and the family maintained it as a Lancaster city landmark until it closed in the summer of 2012.

Part of the store’s stature on Queen Street derived from its unique and unusual style of architecture, especially for Lancaster County, Art Deco.  A style born after the discovery of King Tut’s tomb in 1922, and further advanced at the Paris international exhibition Arts Decoratifs in 1925, Art Deco represented luxury, glamour, exuberance and most of all modernity.   Art Deco influenced fashion, industrial design, movie theaters, trains, cruise ships, automobiles, jewelry, and even had its own lettering style.  From all accounts, the Art Deco style we see on the building today replaced an earlier Queen Anne façade and interior.

Shaub’s expertise included many different architectural styles, but Art Deco was one of his favorites, evidenced by the number of significant commissions where he used it, and McCaskey High School is the largest and most prominent.  Some of the notable Art Deco features on the three-story Shaub’s Shoe Store include the large plate glass window above street level flanked by green translucent panels, each with a center-pivot lozenge window, and the one story tall brass lantern mounted above the side entry. 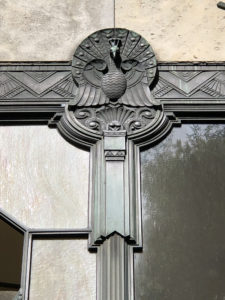 The rear of the building offers a curved brick wall with rusticated coursing, glass block infill and a metal decorative logo ornament above the window. The second floor interior features a graceful and organic iron stair rail leading to the third floor and the prominent and impressive floor to ceiling plate glass window mentioned earlier, with its view down to Queen Street.

For LNP subscribers, here is the link to the original LNP Article, Architect Highlighted Family Business with an Art Deco Facade