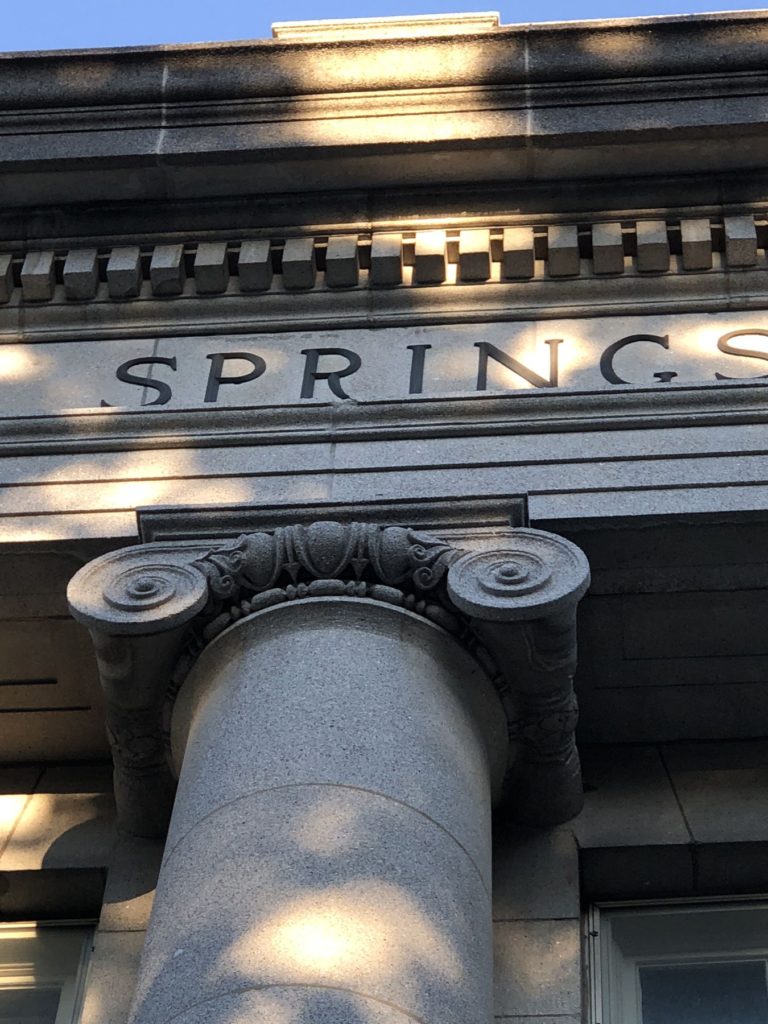 Interestingly, C. Emlen Urban used the description “solid and enduring” to describe his design intent for the Stevens High School during the dedication ceremonies on December 22, 1905.  However, there is no more suitable description than solid and enduring to describe the four freestanding banks that he authored between 1910 and 1923.  The century old buildings remain today—virtually untouched

In 1910, Urban was commissioned by the Union National Mt. Joy Bank to design a structure that would speak to strength and security and remind customers that their accounts were in safekeeping.  He chose a massive masonry limestone symmetrical structure in the Beaux Arts style to reflect that message.  The classic Greek design elements, including paired two-story tall ionic columns, flanking pilasters and an oversized entablature with parapet, reinforce strength and security.

In 1912, Milton S. Hershey commissioned Urban to design a building that would impress the public and encourage people to start saving for the future.  The two-story marble, brick and granite Renaissance style structure includes a well-proportioned Greek pediment and entablature resting on paired columns.  The interior is as impressive as the exterior with marble flooring, mahogany millwork, and an imposing vault door, topped by a 30 day wall clock flanked by lions representing time and strength.  Located at the intersection of Cocoa and Chocolate Avenues, the Hershey Trust Company still retains its impressive public stature.

Urban’s third design, Lititz Springs National Bank, was designed in 1922 and holds the distinction of being his only bank with a corner entrance. The two story masonry structure, at the corner of Main and Broad Streets, softens the intersection with the curved façade and thoughtful detailing.  Although another imposing and impressive design, this bank features generous amounts of windows and natural light.

Ephrata National Bank retained Urban to design its new building in 1923.  His fourth and final freestanding bank embodies all his knowledge of bank designs to date, and presents another fine example of thoughtful and creative design innovation.  The combination of Vermont marble columns and English bond brick on the façade emulate the Hershey Trust Building, and the eagle perched above the main entry resembles Lititz Springs National Bank. The sky-lit interior, utilizing American walnut millwork, is organized around a 26-ton vault door and frame.  More than 10,000 visitors toured the aptly described “landmark of admiration” on dedication day, July 11, 1925!

The full article, C. Emlen Urban’s architecture was something Lancaster could bank on, can be found on LNP/Lancaster On-line.