A few months ago I took a day out of my schedule to volunteer at a summer camp Penn State offers to high school students each July.  Students interested in architecture, landscape architecture, engineering or construction can immerse in the field for a week, living on campus and attending studio sessions.  I had known about the program for some years, but this was the first opportunity for me to get involved.  If nothing else, I felt it was a worthy cause to prepare high school aged students, who haven’t already committed to a particular line of study, for what might really lie ahead. 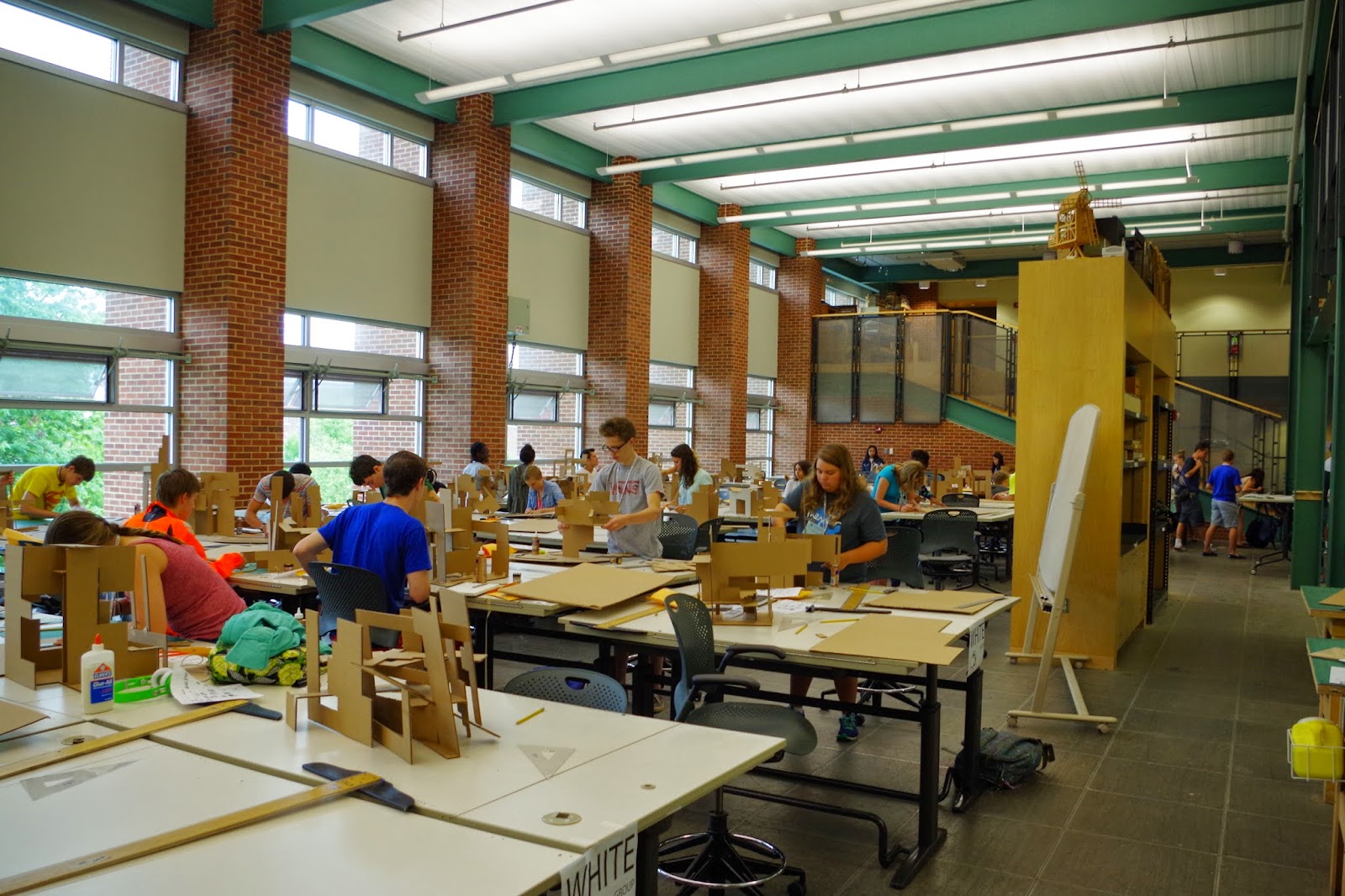 The students arrive on Sunday to register and settle in, but they were also subjected to their first studio session immediately.  They were to cut a sheet of cardboard up into 11 pieces, without really knowing what they were to do with them later.  They would return to these pieces on Tuesday, because on Monday, they took a field trip to Fallingwater and Wright’s lesser known house in the same general area, Kentuck Knob.  Understandably, the field trip was very popular.  Tuesday is when I showed up, and not knowing exactly what I was to do, found myself walking around the studio, watching the students work on their cardboard.  They had all been together for a couple days by now with their college student counselors, so I felt a little out of place at first, not really knowing what advice to give them immediately. When the groups split up just a little while later, I chose to accompany the group who was going to visit a local engineering firm; a firm where I knew almost everyone, as they are our consultants on many, many jobs – Reese Engineering, Inc. (REI), located just a few minutes ride from campus.
The tour would be interesting, I thought, since my office designed their building, and it would give me a chance to get to know some of the kids a little better in familiar surroundings.  I was able to chime in during their tour of the building, providing an architect’s vantage point as REI was our client on their own building, as well as the MEP designers.  Unfortunately I think a lot of the kids focused on the fact that the central kitchen space in their office; not only did it look cool, but they learned that the office served lunch to their employees many days throughout the week.  Also, the fact that they have an onsite fitness room was very impressive to the students. 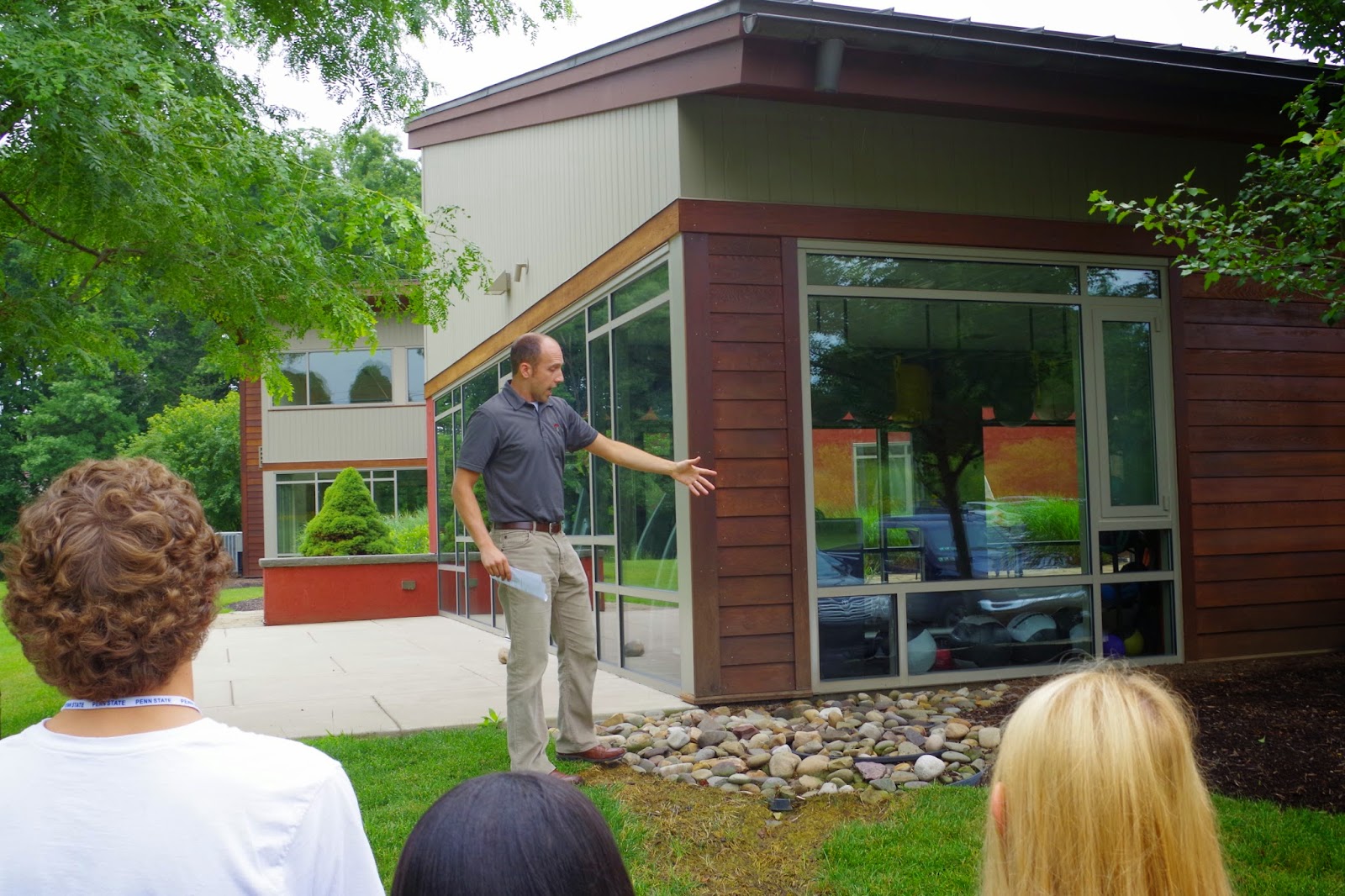 After that another engineer provided a rather in depth look into design tools and programs, including software that could pinpoint temperatures and predict breezes inside a virtual building that was designed to utilize natural air circulation.  I have to believe it was a little too much for 10th and 11th graders.  It was too much for me, that’s for sure.  After our lecture there, we got back on the bus to go back to the University to have what was billed as “lunch with a professional”. 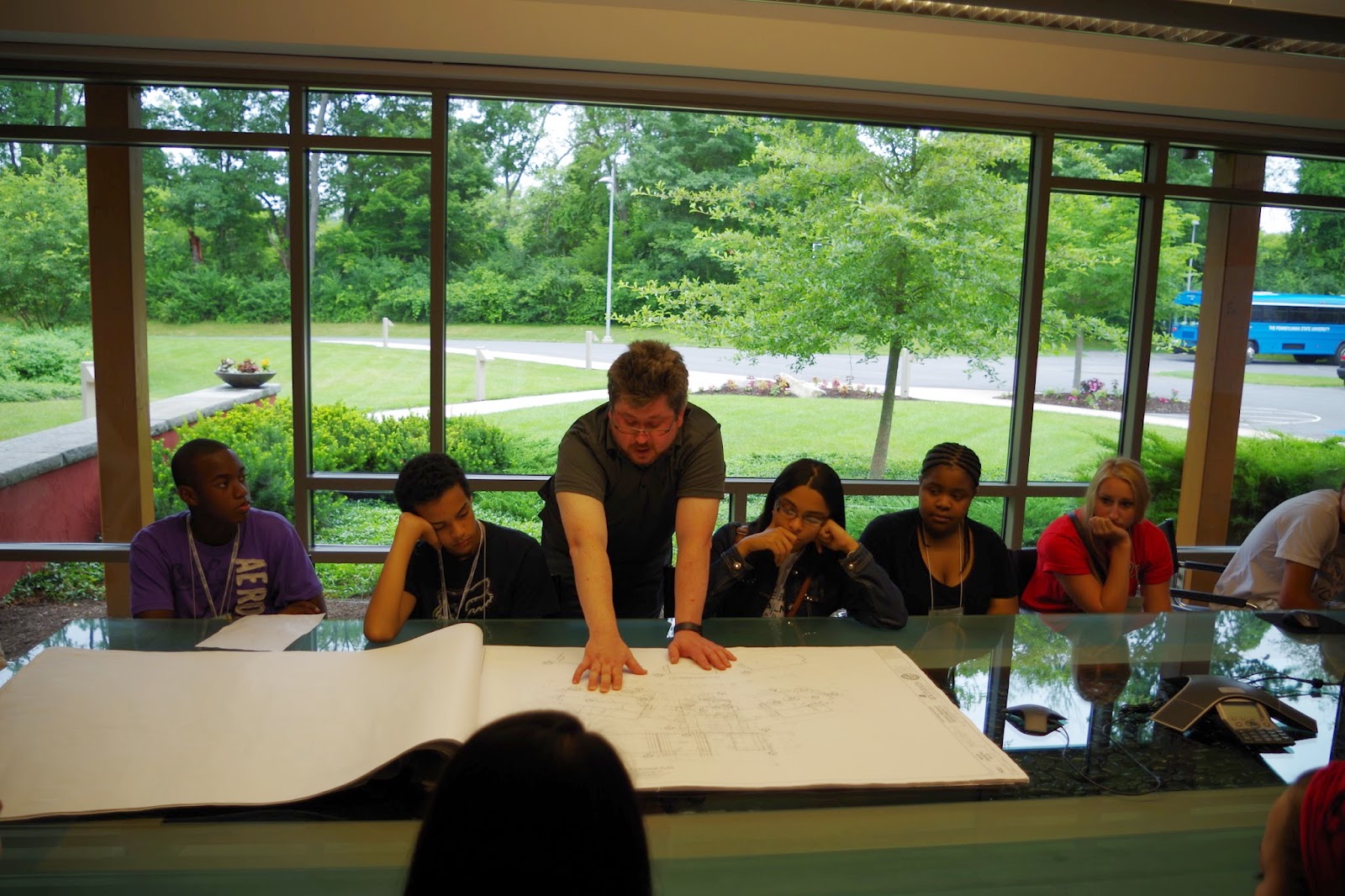 This was actually one of the more enjoyable parts of the day.  While waiting for lunch, I had time to catch up with my thesis advisor from when I was in school, Dan Willis.  But when it came time to sit down, we needed to split up so that as many tables as possible had an actual professional at it.  I sat down with a couple kids and I was really impressed with the questions they came with. I got the obligatory “How much will someone make” questions, which I can’t blame them for asking.  When I see that the yearly tuition at Penn State is over $16,000 (in state, without room and board), you have to be able to justify your major.  None the less, I was able to provide them with average starting salary range of someone coming out of school, granted it had a lot to do with location, etc.  We touched on the fact that new graduates have had a lot of trouble finding jobs in the last several years, but I was able to report that our office is very busy and has been hiring, including several summer interns.  Summer interns turn into full time employees, like I did, almost 20 years ago at my firm.
Many of the young people were interested in knowing how to prepare for college and getting into their college of choice.  I was impressed with how prepared some of the students were.  Many students not only had college prep courses in math and science, but also in a wide variety of artistic pursuits.  In my own past, I think of how more useful it would have been to have learned how to weld rather than learning to draw an isometric drawing of a screwdriver in high school drafting class.  My only real suggestion to them was to learn how to communicate well, and I stressed how much correspondence there was in the business of architecture, beyond knowing how to draw.
After lunch we returned to the projects the students had set aside before the field trip.  They had a choice of combining those eleven pieces of cardboard into a beach house, a church or an airport.  Depending on the project, the concept of scale was very important obviously.  Entry and site lines were stressed as well.  Once the project developed to a point, trees were to be fabricated out of metal wire in appropriate sizes to reinforce scale and connectivity to nature.  Perhaps based on their trip to Falling water, one of the projects actually was organized around a huge tree.  There were a lot more churches and beach homes than airports, perhaps because it was a more comfortable scale.  But in the end, as in school, it wasn’t really about the project.  It was about the learning experience. 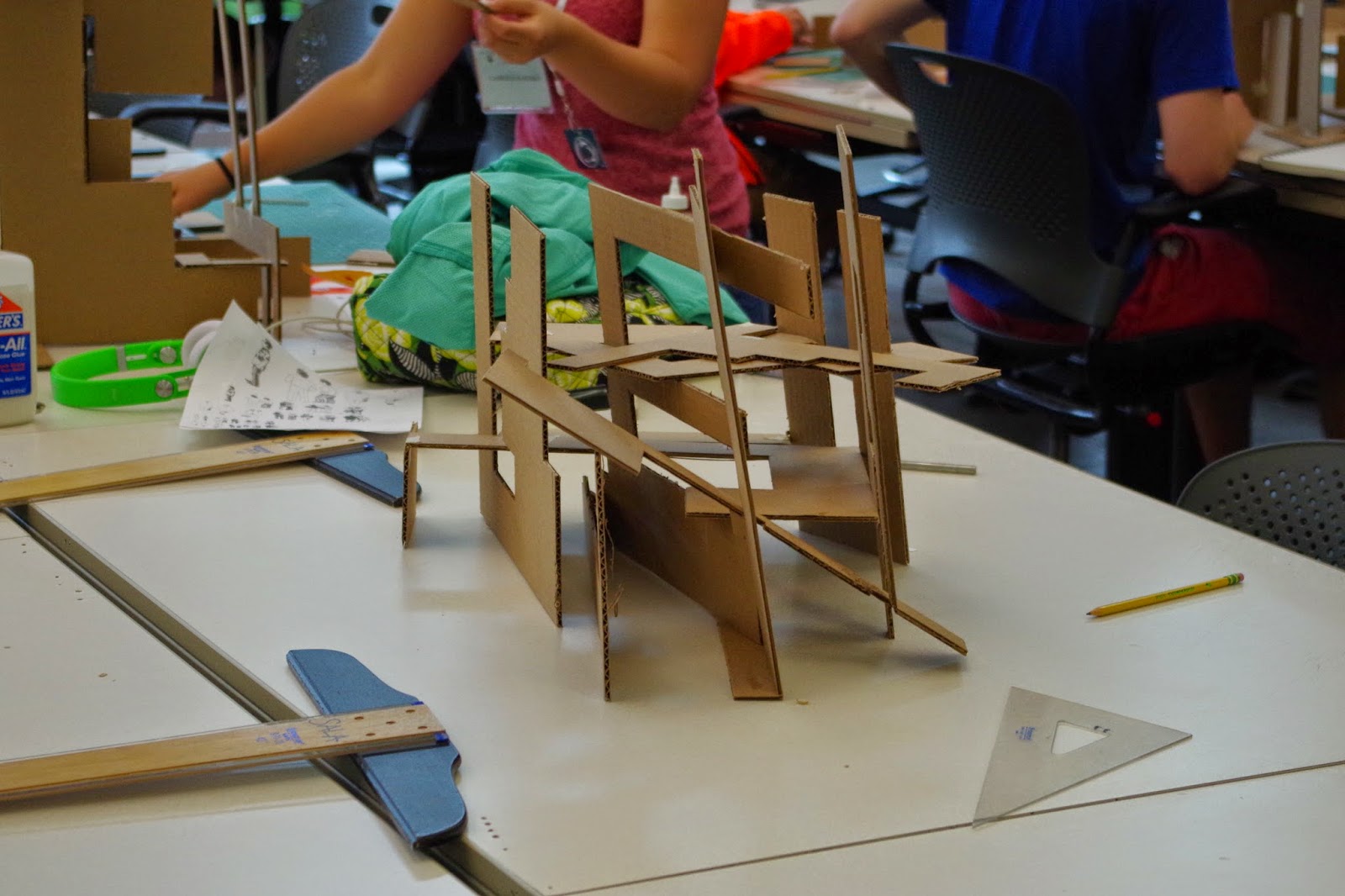 I had volunteered to help the students because I felt it was a worthy endeavor.  I think I got a lot more out of the day for myself than I expected.  Certainly, I asked questions of various students about their projects, maybe nudged them into one direction or another.  I may have suggested that architects (at least the ones I know) never use calculus so maybe consider some other useful coursework if you have the option.  The students’ attitudes and energy gave me a reminder of why I was who I am.  I thought that this program, had I been able to take part of it as a high school student, would have been a tremendous transition from college prep in high school to architecture school.  As we all know, architecture school is different from most courses of study.  Most first year students in other majors do not have three quarters of their very first semester dictated by architecture prerequisite credits.  They have time to take general education classes, adjust to living on their own for the first time and find their way before they get into core curriculum.
The immersion the students felt of showing up on a Sunday afternoon and already starting to cut cardboard by Sunday night is a good parallel to First Year Studio, as I remember it anyway.  I had to wait until the end of my first year to see Fallingwater, which was an essential, spiritually charged experience for which I credit giving me the ambition to fully pursue this career path.  After that day with the students I thought back, for the first time in years, to my moment standing on the bottom platform of the stairway that ends in the stream at Fallingwater, convincing myself to go on to Second Year and try to excel. 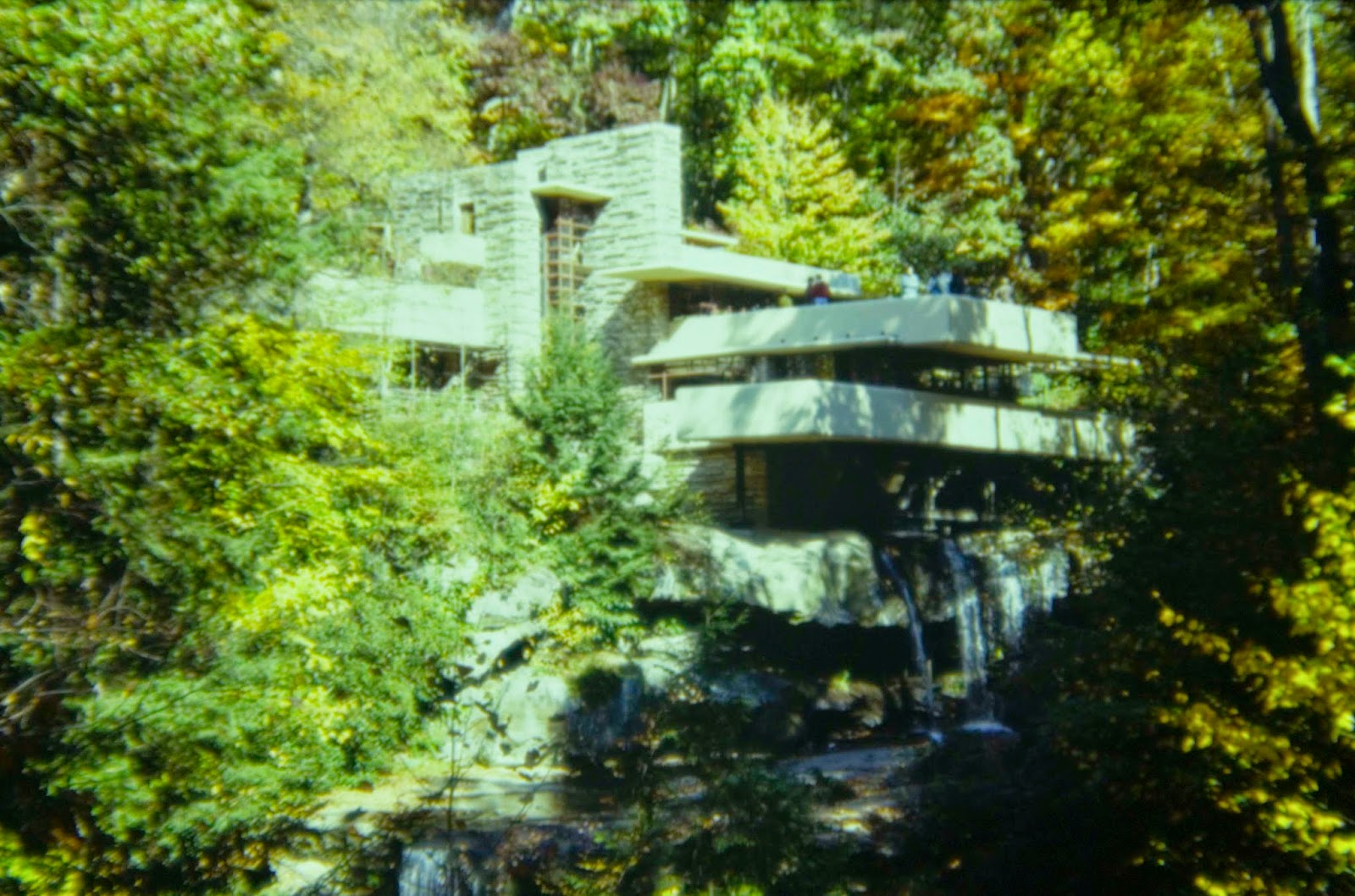