You have to choose your battles.  A few years ago, we went down to Virginia to meet with the local code officials about an impending project for a preliminary plan review.  Every jurisdiction is different in how they apply the codes and we wanted to get everything straight before we got close to formally submitting plans for approval.  The Code Official and the Senior Plan Reviewer were there as well as two representatives from the Fire Marshal’s office.  Everything went fine and we asked our questions and we were able to judge how this jurisdiction was going to be to work with.
When we ran out of our prepared questions, we asked if anyone there had any pet peeves or things they like to see.  It is good to ask this but it is a bit of a loaded question and can also be the opener to the proverbial Can ‘O’ Worms.  It turns out the Fire Marshal doesn’t really like vinyl siding or engineered lumber (TGI’s).  Their reason for the aversion: vinyl siding “is like solid gasoline” and “TGI’s fail too soon”.  Now, both of these items are tested and rated like any other construction material.  Both sides of the table knew that the design called for both, and both sides also knew that it was perfectly acceptable, according to all prevailing building codes.  The fact that they don’t like those materials really didn’t matter much.  But for a response, we listened and nodded our heads and that was it.  We all knew those two products would be the project in the end and arguing about it now would only cause our local hosts to feel less amiable towards the out of town architects.  So we basically zipped it while indicated we understood their point of view.
But their pet peeves were something I had not heard before, and they weren’t done there.  We were only about 2 ½ hours away from our home office, in basically the same climate zone, but apparently down there mulch in planting beds will ignite and consume buildings with fire.  The Fire Marshal asked that we keep mulch as far away from the building as possible.  Their cautionary tale is an example I wish I was creative enough to imagine on my own.  Picture it.  It’s free Pancake Day at the local IHOP and the line is wrapped around the building.  (Pancake Day is March 7th in 2018, so mark your calendar).  Someone in line thoughtlessly flicks a lit cigarette into the IHOP’s mulch bed.  Poof – the solid gasoline, I mean vinyl siding, bursts into flames.  No one was hurt, but many a folk went without their free pancakes.
What do you say to that?  In the end we said we would talk to our landscape designer about running a boarder of pea gravel around the building in lieu of pushing mulch beds right to the exterior walls.  But in reality, we know we wouldn’t be able to pay for all that gravel.  There was nothing else we could have said to assuage their fears.  Our meeting was over, it was lunch time, and suddenly we were in the mood for pancakes. 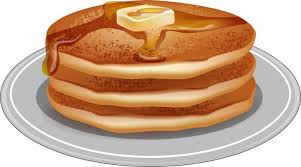