From conception to birth, pardon the analogy, it was a journey of about three months.  Starting with our first organizational meeting in September to the Client party in December, to tear down the first weekend of January.  For an ephemeral display, that is a significant amount of time.  The display was officially “open” from December 11, 2013 and was set to be torn down on January 4, 2014 – just over three weeks from completion.  Many who tour the display ask what we do with it once the holidays are over.  Honestly, it is without much guilt that we respond like an umpire at home plate: “It’s outta here!”
I imagine it is somewhat like the float builders in Mardi Gras or the Rose Bowl.  Granted this is a simplistic analogy, but we all go into it knowing that the creation will not be permanent.  Or, for the architecture nerds, Aldo Rossi’s 1979-1981 Teatro del Mondo, which was built to float across the Adriatic and intended to be dismantled once it reached the other side.  But we still have our piece of Aldo in the china closet in that espresso maker that is too nice to muck up! We labor on the display knowing full well that its destination will be in the dumpster in a few weeks’ time.  But we labor none the less.  As Aldo so poetically put it (I paraphrase here):  the built environment provides a stage for life to occur.  Instead of icing and gingerbread, he used painted plywood and a zinc roof.
But until its demise, mileage, we shall get from it.  Immediately after the Client Party, the local news will come for a live look in on us (starting at 5 AM, lucky for the guy showing up for that!), and a couple of local publications will come to snap a few photos.  We also open it up the next three Thursday evenings to the public.
And does the public come.  Thank goodness for the new office because we had over 200 people on the fist night, over 300 hundred on the second night and, on the last evening (the day after Christmas) we had almost 450 people.  They waited up to an hour and a half in line.  For some time, some had to wait outside.  We opened the doors to the public at 5 PM right after work and technically they were open until 7 PM (although we didn’t turn any latecomers away).  Then it took almost 90 minutes for those last visitors to make it from the front door and out again.  Once a visitor got to the display, it would take between 10 and 15 minutes for those people to get the whole way around. 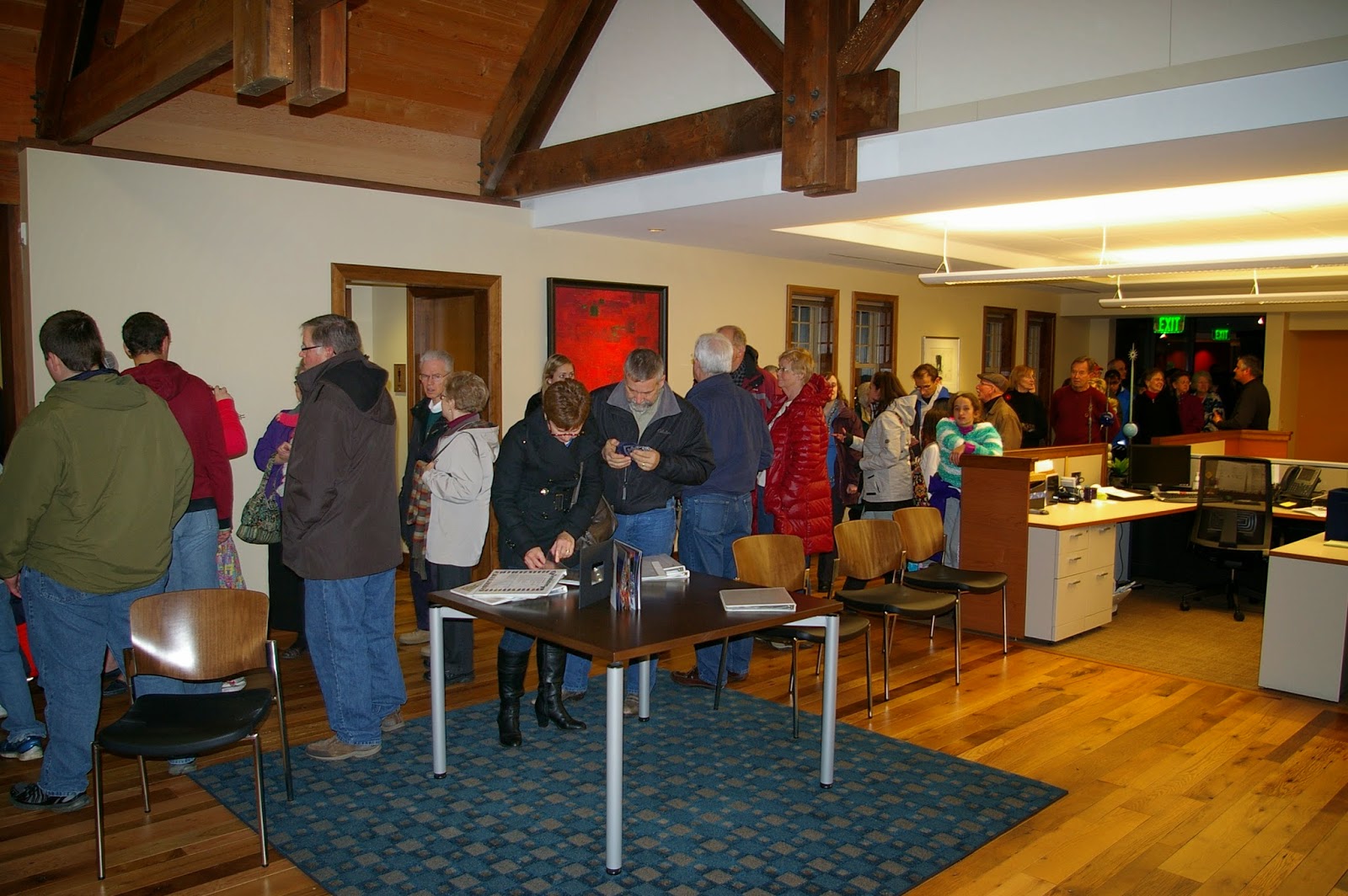 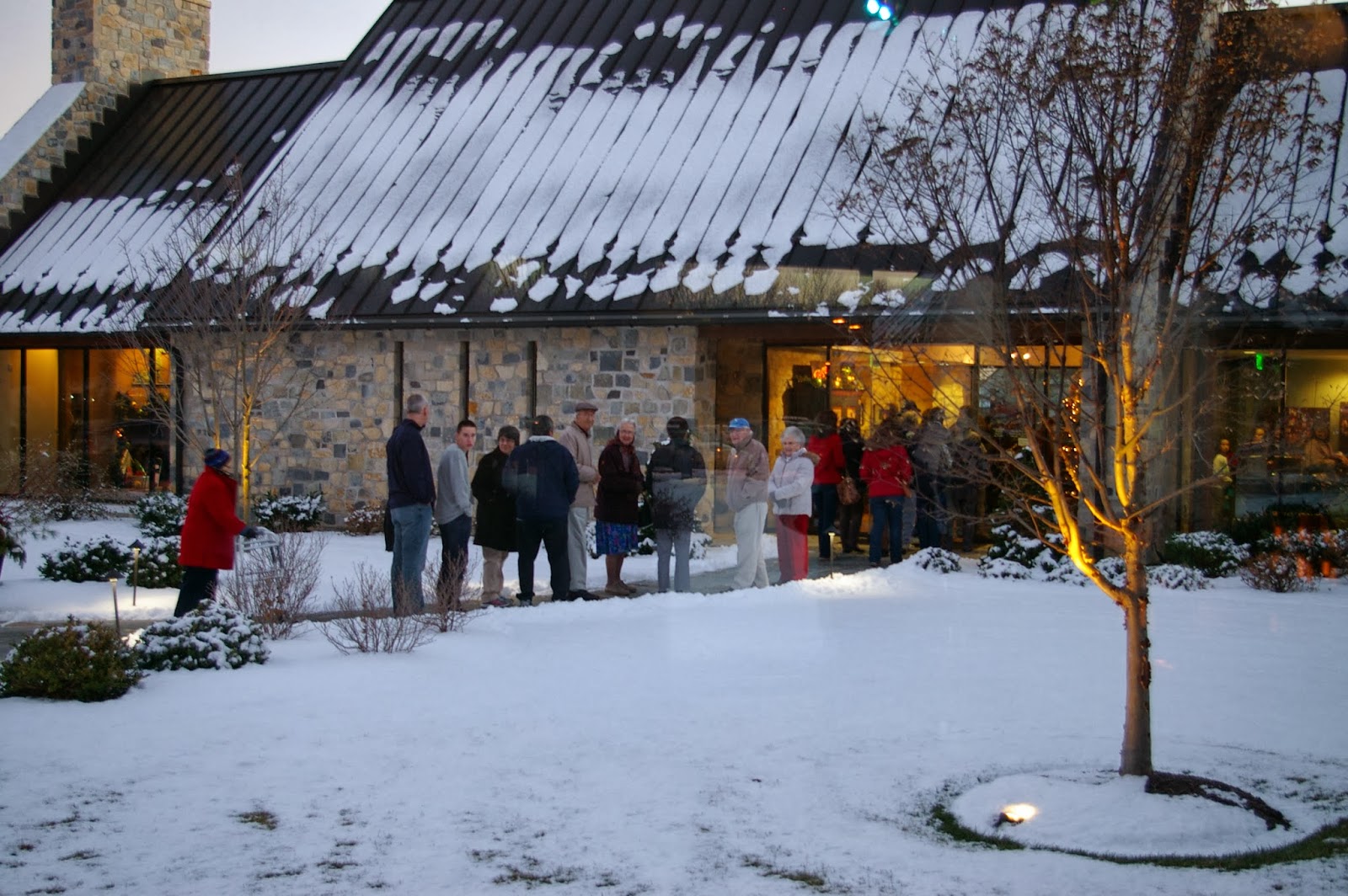 My apologist comment to the folks coming in was , “I sure hope it was worth the wait.”  Most people, either sincere or very good fibbers, seemed to think that it was all worth it.  We used to allow people to come look at it whenever they came by during business hours, but it became so disruptive over the years, that we had to set something up outside the work day.  In three days this year, over 1,200 visitors.
I think, and I mean this sincerely, that the mobile phone has exasperated the wait times in “modern” times.  People come in with Cellphones, iPhones or iPads and they begin to make a documentary of their visit.  I literally saw people trying to take detailed pictures with a flip phone this year.  And the whole selfie thing is, well, let’s just say it held up the line far too much.  I hope someone proves me wrong and we end up in some HBO documentary or something, but I highly doubt it.  No one looks through their own eyes anymore, always filtered through a screen…
After that final public night, it is just a matter of time before we have to dismantle the display.  The first Saturday in January we will typically meet for a few hours, maybe ten or twelve of us.  It really only takes a few hours.  Mostly, there is a lot of banging, tearing and smashing, followed by a lot of vacuuming.  No craft here: 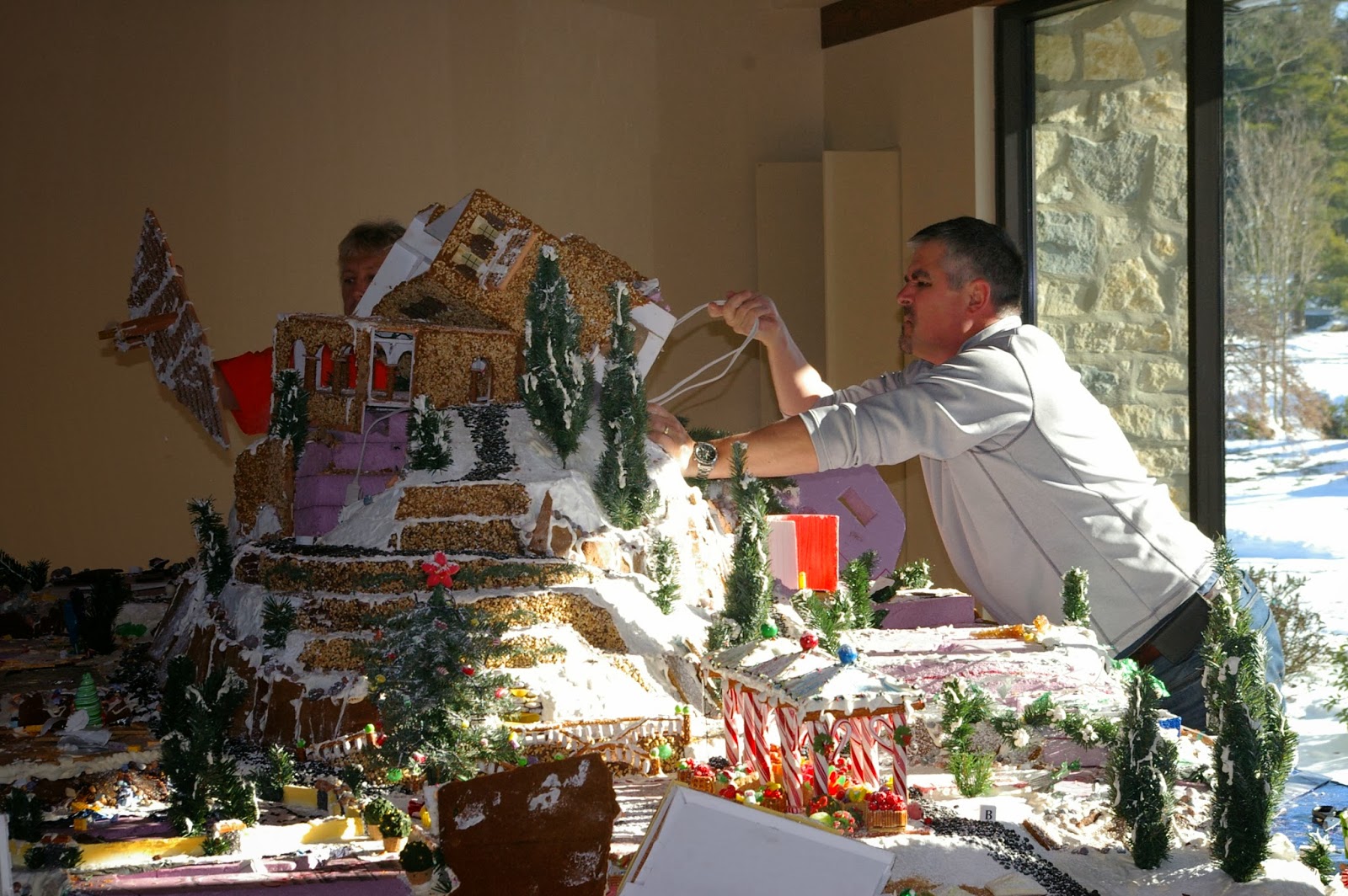 Actually there can be quite a bit of sawing and cutting, just being careful enough not to cut the lights and extension chords woven into the underbelly.  That icing gets really hard. 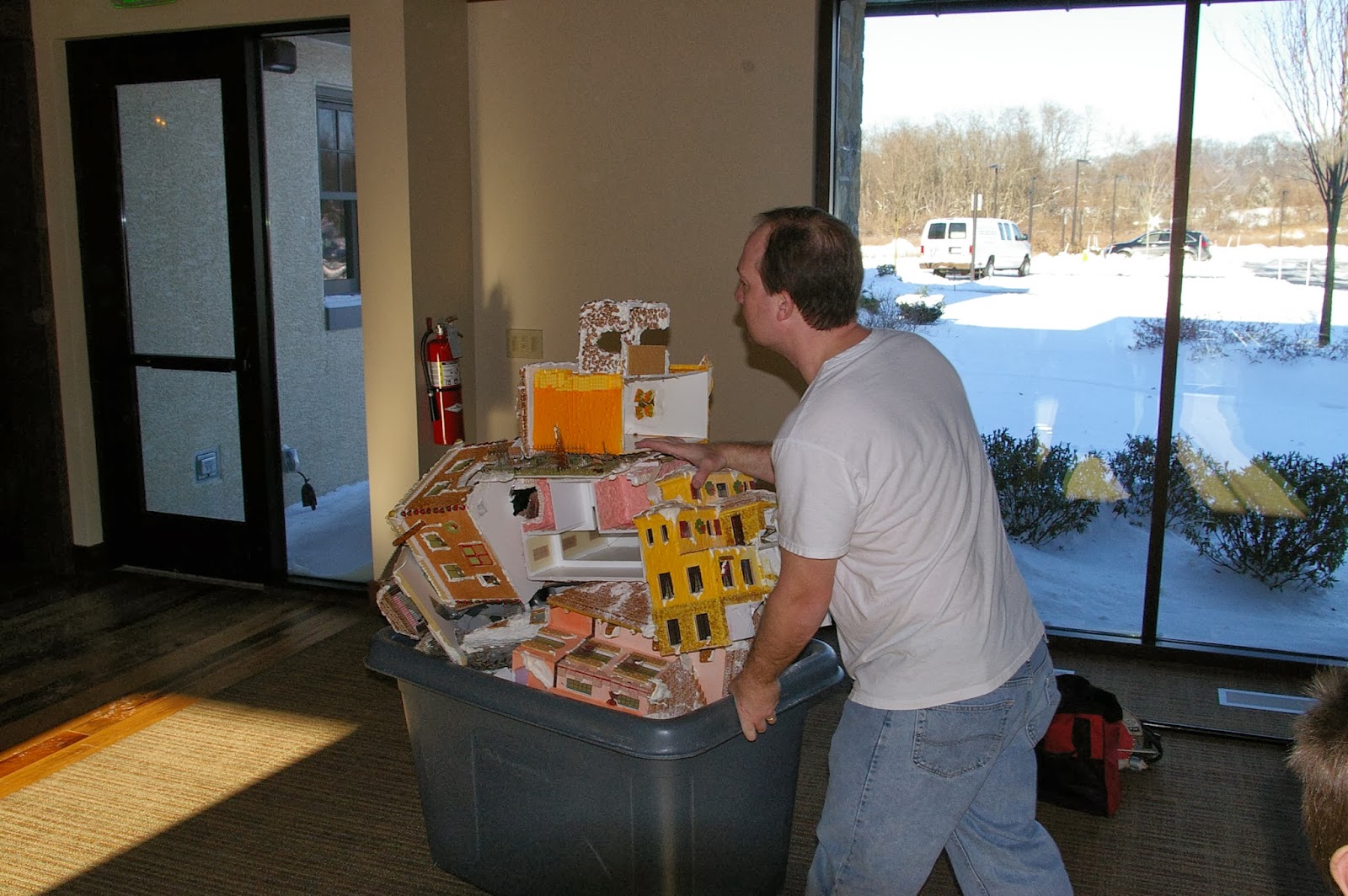 And just like that there are hundreds of man hours tossed in a cart, being hauled off the the dumpster.  I was able to pluck off several characters I had made out of fondant that will dry rock hard and can be used in the future perhaps.  I saved my kids gingerbread boats (for now). 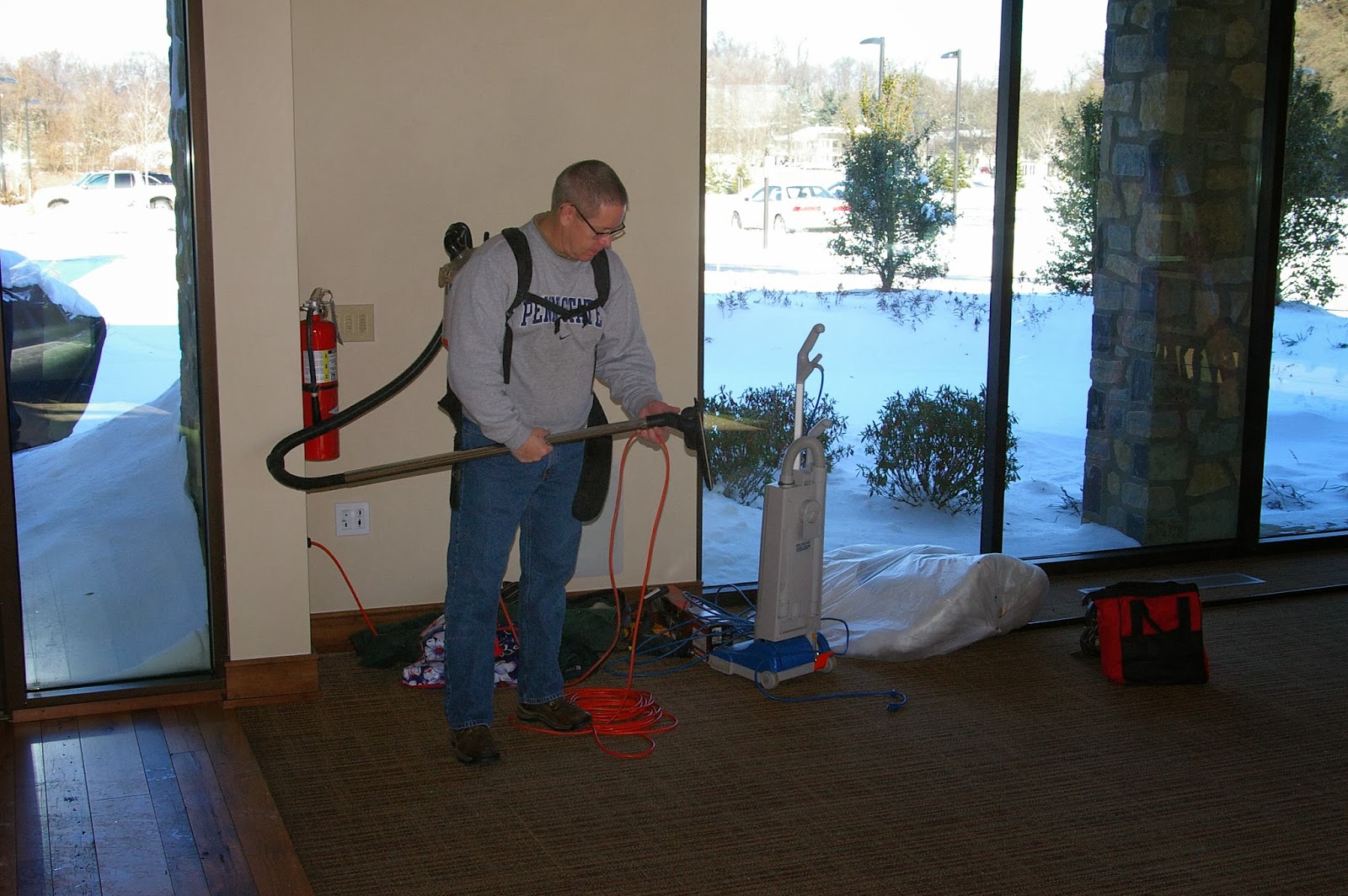 While it looked pretty cool and might have been able to bust some ghosts, this backpack vacuum wasn’t so good at pulling up candy from the carpet. 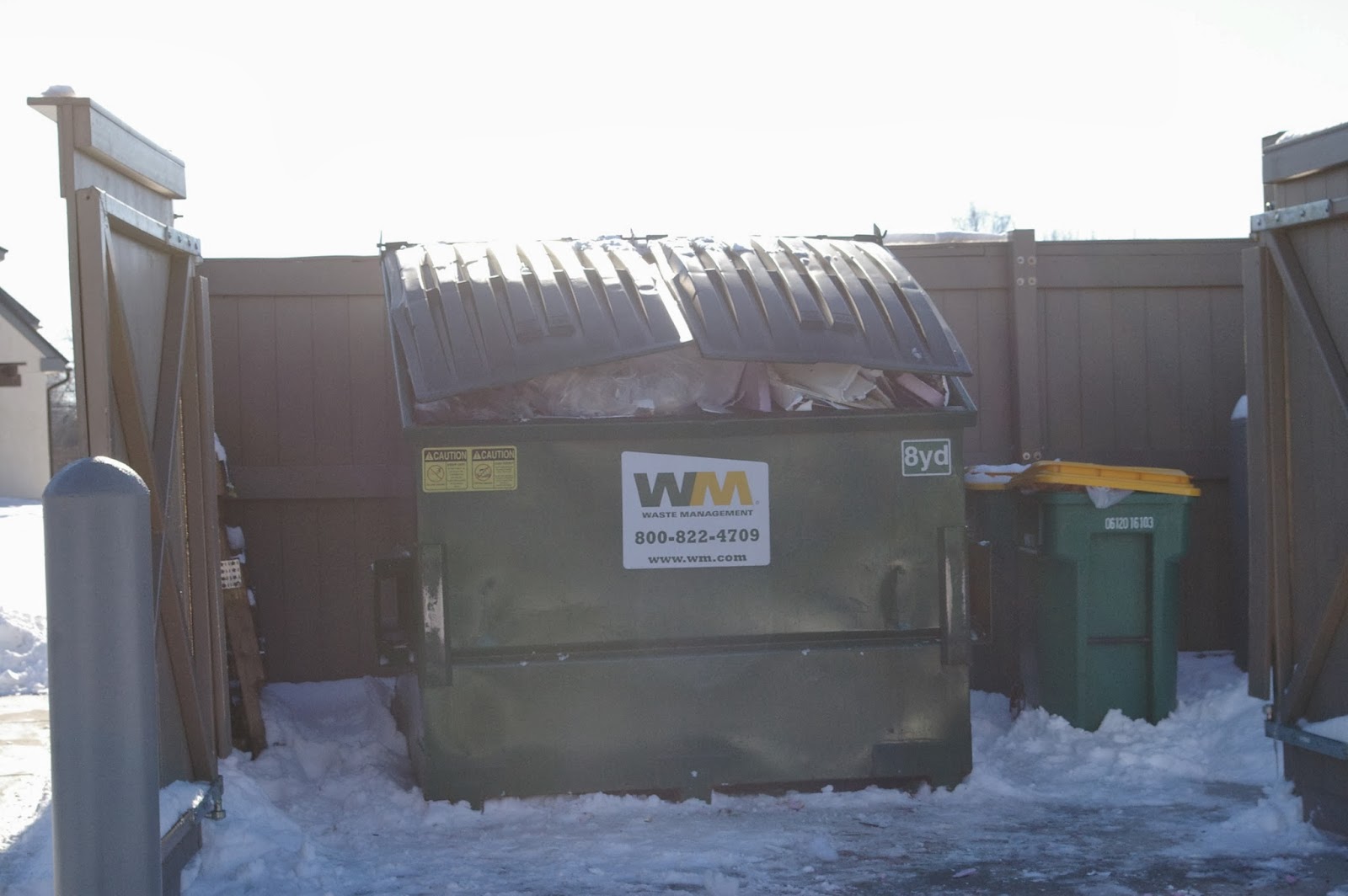 And this became the final resting place of the 2013 Gingerbread display.  So full the lid wouldn’t shut.  In the old office there was a sense of relief to get our much needed table tops back.  This year the display didn’t usurp any space that we desperately needed back, but it didn’t really dampen our enthusiasm to remove it.  After seventeen of these, at least for me, it is just another stage in the development of the display.  Tear down.  Without it, we can’t have another one next year.