Our gingerbread display here at RLPS is legend.  I can say that because it has been going on for twenty-five years, annually since 1987.  Those of you quick in math may point out that this is a twenty-six year span. You’d be right.  But we did not do a display in 2001, following the 9/11 attacks, the aftereffects of which had already been felt heavily on us and our Clients.  The decision was made to abstain that year.
That said, the gingerbread display originated as a fun activity for our Clients at our annual Christmas party, held at the beginning of each December on a Wednesday night.  Quickly, it snowballed into a larger than life display, garnering local news coverage and we eventually intuited public viewing options after hours because allowing the public in throughout the day became so disruptive, it was hard to get through our old design studio.  Busloads (literally) would show up in the middle of the day.
I say “old” design studio meaning we’ve moved our office in the last 12 months.  So this is our first display ever in our new digs.  As you might imagine, there was a good amount of thought as to where the display would go, and how people would get to it.  I must say, with a few exceptions (I will get to those later) the display went off very well.  The exceptions had nothing to do with the building design, but how the display was set up for circulation.
One of the questions we hear all the time is, “How do you come up with the ideas, year to year?”  This year, i tried to document this part of the process, as the actual making of the display and the finished product garner a lot of attention and photographs, this part is a little less exciting, but nonetheless an important part of the story.  Each year, we begin with some committee meetings and someone (usually a newer hire) is tapped to be the main organizer.  This is our kind of hazing; much more cruel than any other I’ve ever heard about even in the recent NFL allegations in Miami.  This person has to herd in dozens of people, organize volunteer work sessions, make sure food is there for the volunteers (ultimately important) and keep the schedule.
We start thinking about the theme in early Fall.  This year, a theme that has been knocking around for a few years became the predetermined theme.  This is unusual for us, as normally, the first meeting of the Committee is brainstorming ideas and coming up with a short list of ideas that are ultimately voted upon.  This year the underlying idea and even a concept plan was presented to the Committee on September 25, 2013 at a lunchtime meeting.  We had pizza for lunch… 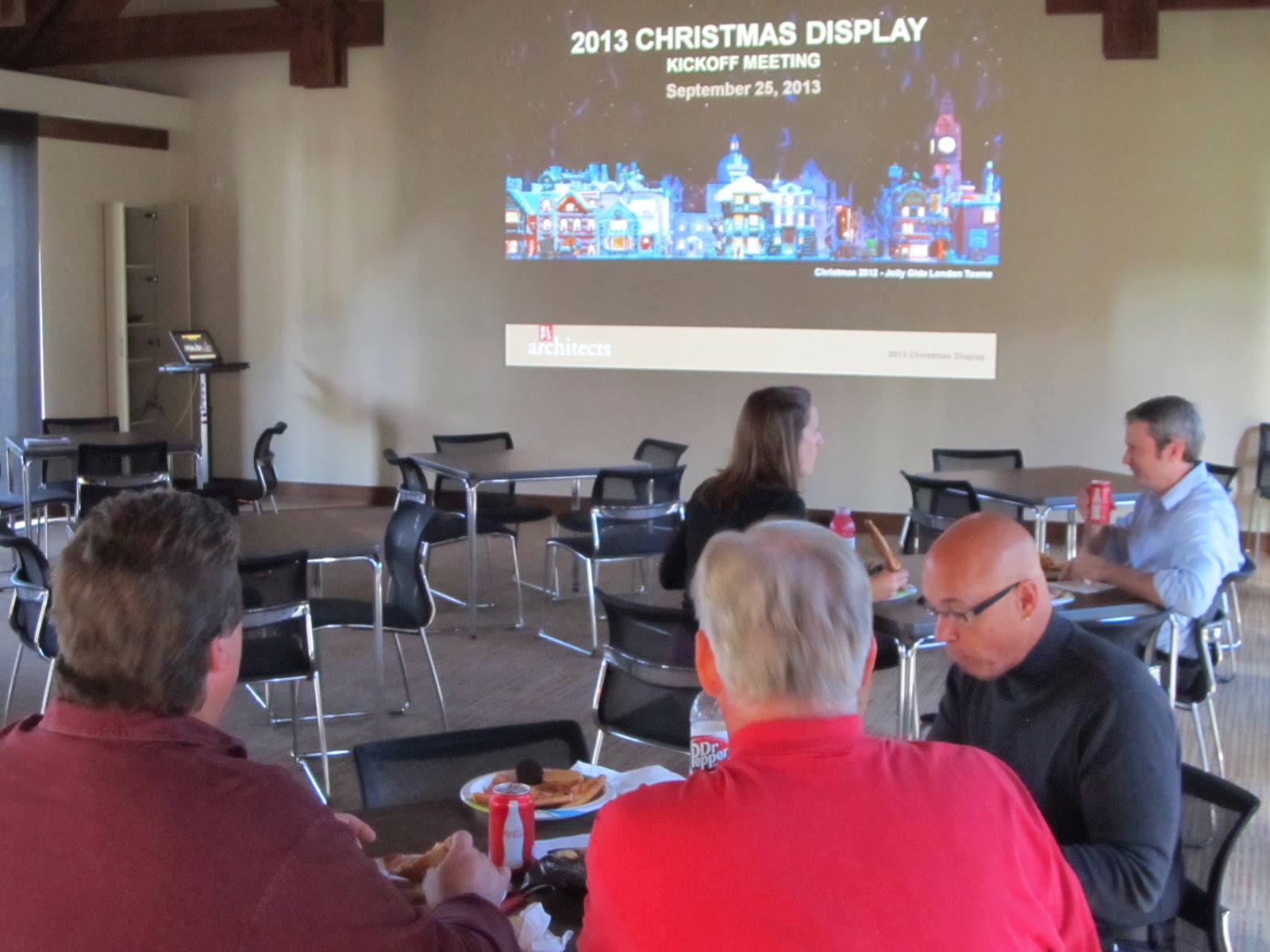 Some planning went into the presentation ahead of time: 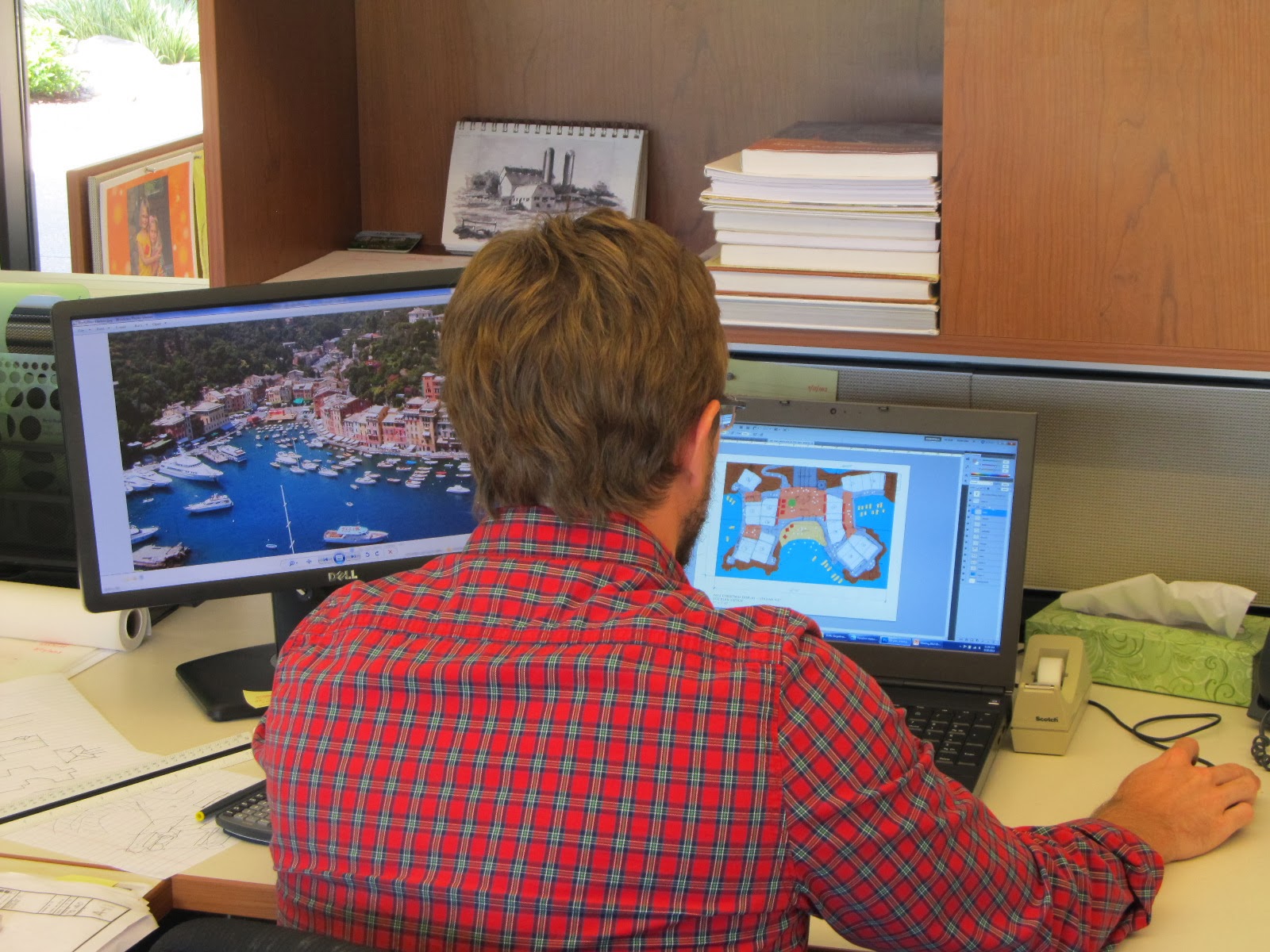 …and the idea was presented to the Committee.  Already ideas were in place as to how the houses would be placed on the site and in relation to the other houses: 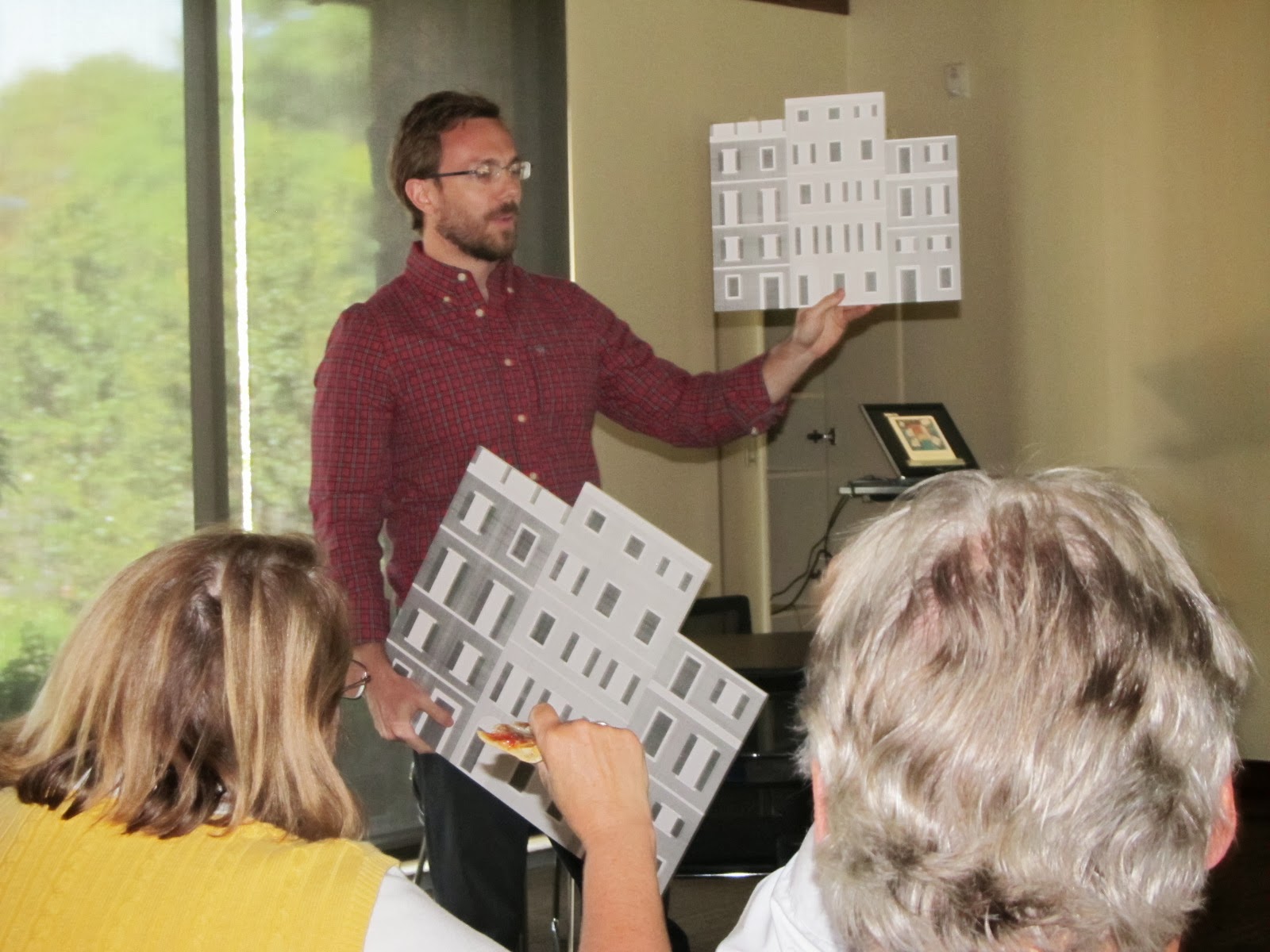 Scale of the houses had to be decided.  3/8″ = 1′-0″ works well for us so the buildings aren’t too big, nor are people in the setting too small to build.
This year we had three formal meetings.  The next meeting was about two weeks later.  This year, as we were in a new space, we had to build an entirely new base for the display.  We had used a pair of layout counters in the old office.  This year we were placing the display in a larger room with no fixed furnishing to work around. 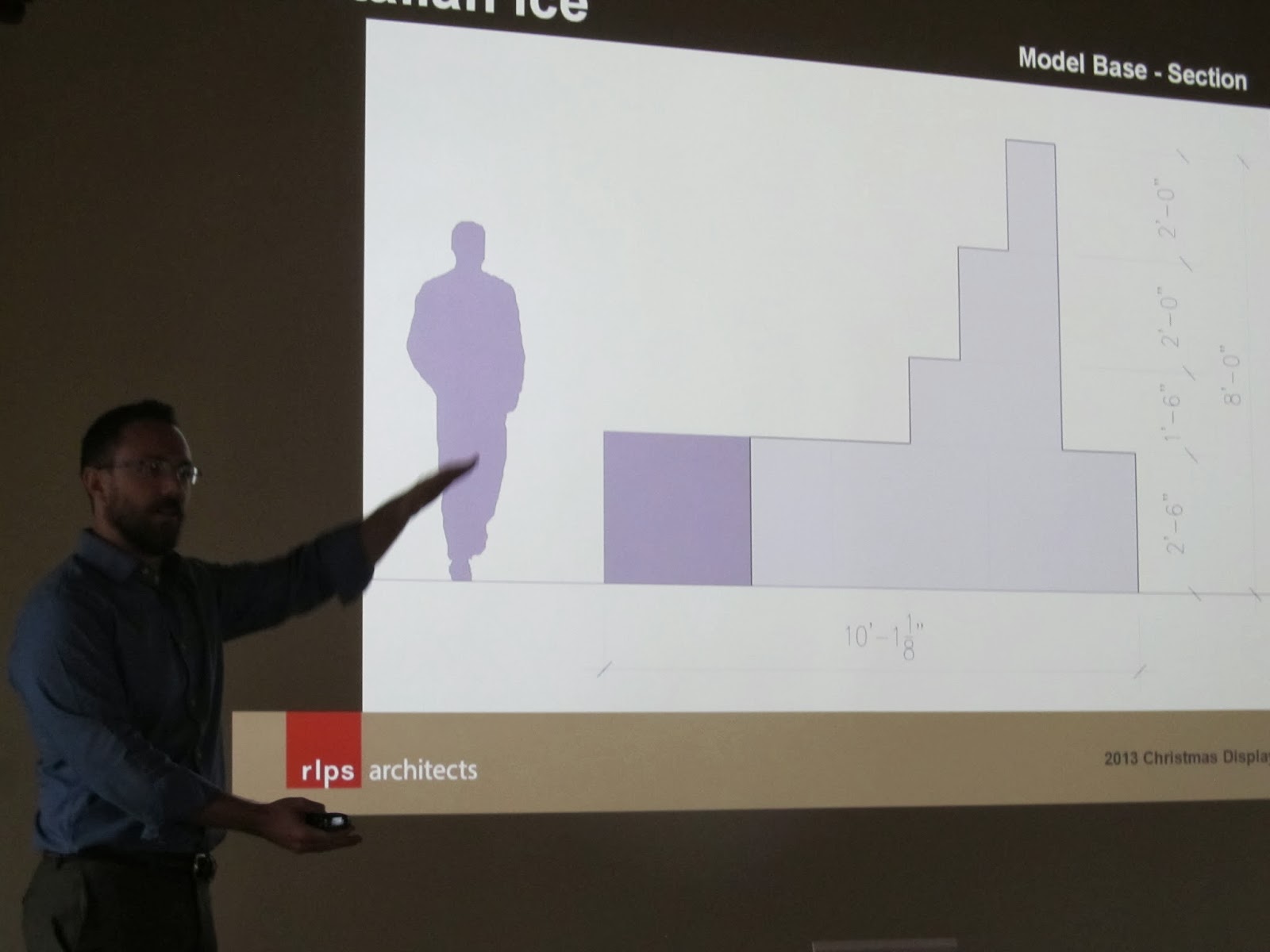 This allowed us to lower the display and there was no real constraint on front versus back.  As the them was to be an Italian hill town, we noodled on how best to represent this concept.  Speaking of noodles: Noodles would take a prominent role in this display.
The last formal meeting took place in the first week of November.  We ate subs.  I will pick up the story in the next posting… 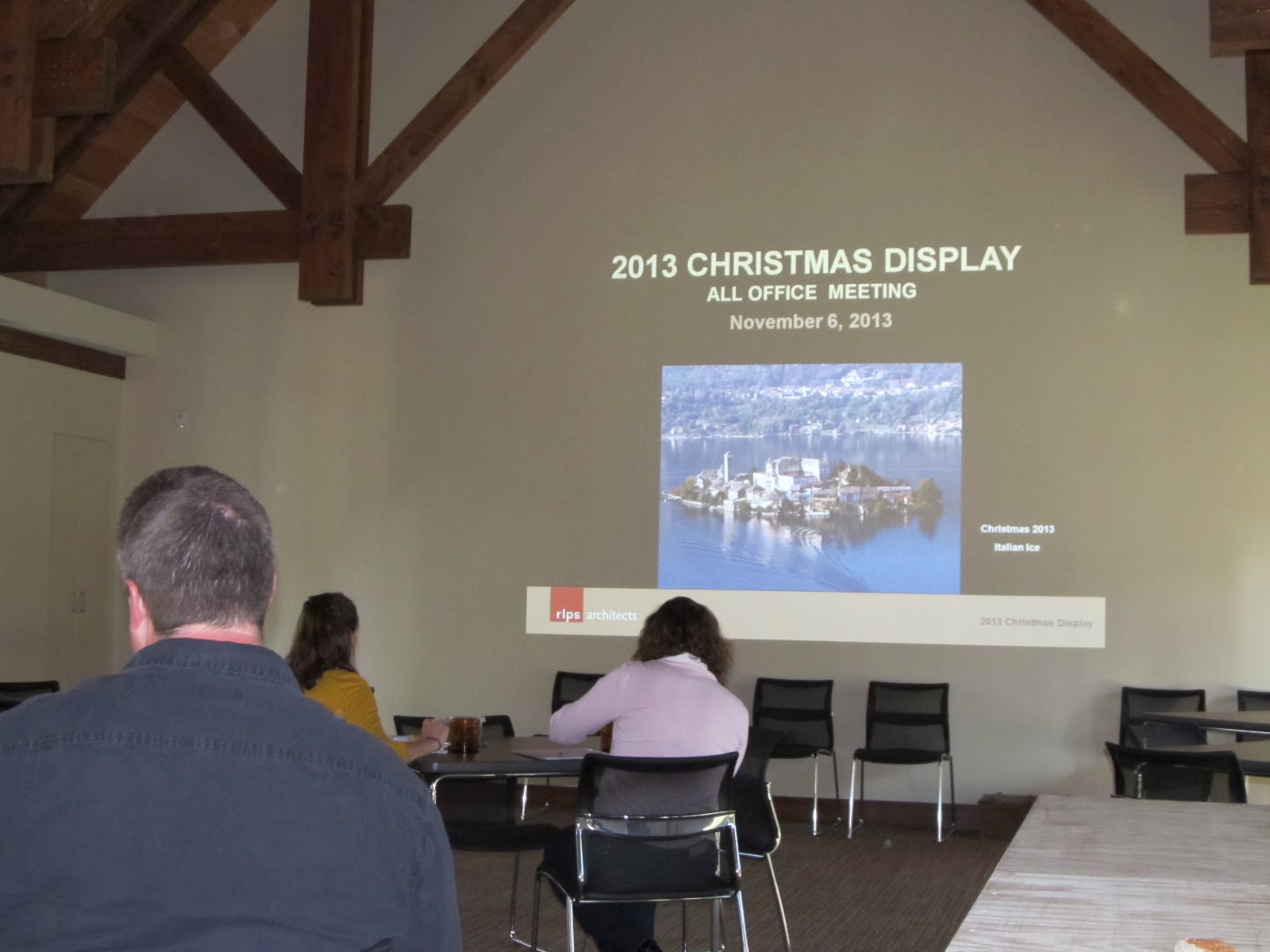