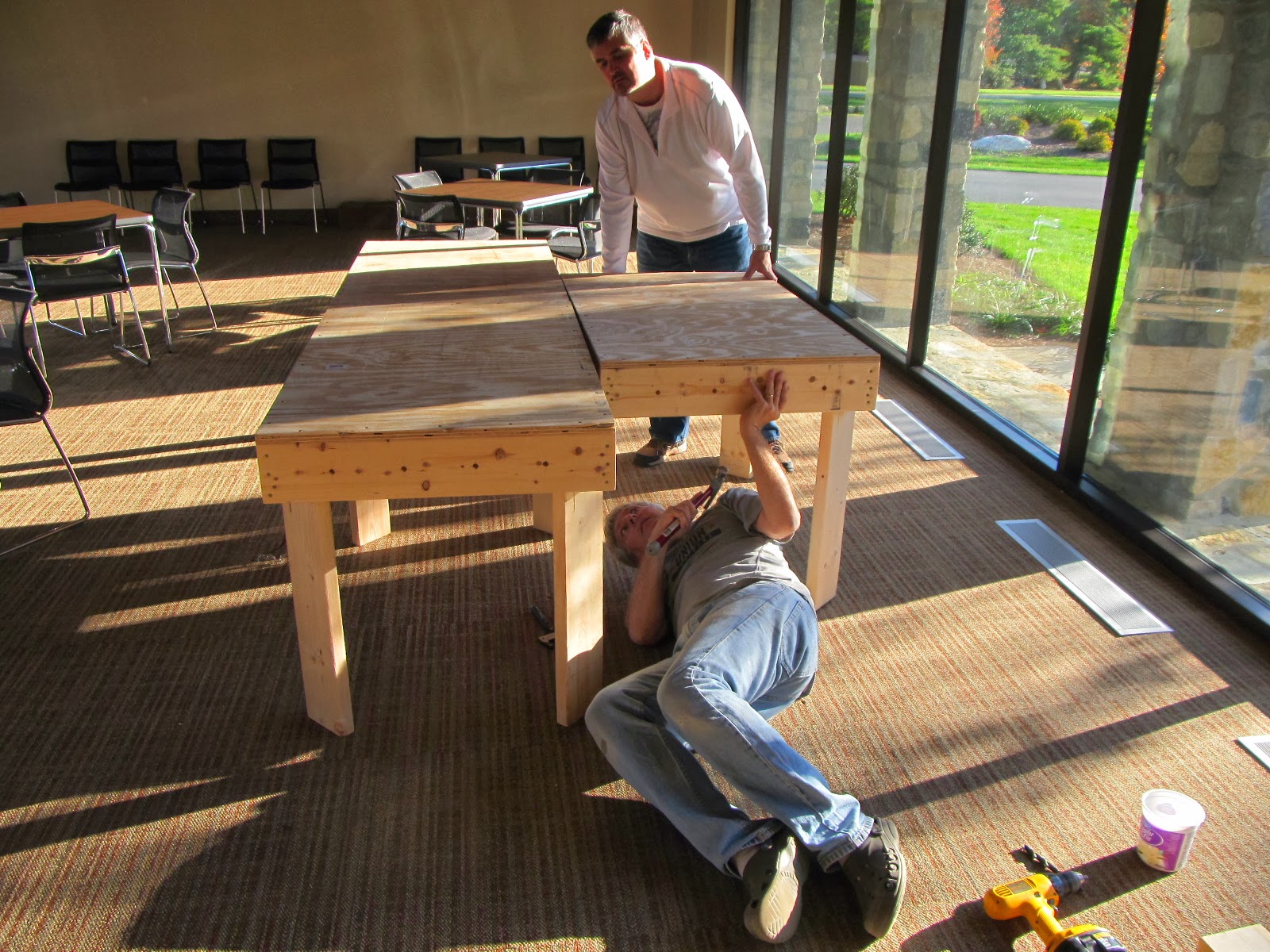 This year, in our new office the construction of the base was a bit different in that we had to start from scratch.  In our former office, we had two layout tables that served as the foundation of the base with some 2×6’s spanning over top.  This year, Eric created a modular system of plywood covered tables that can be bolted together.  He built them all in his basement and they were assembled in the Great Room. 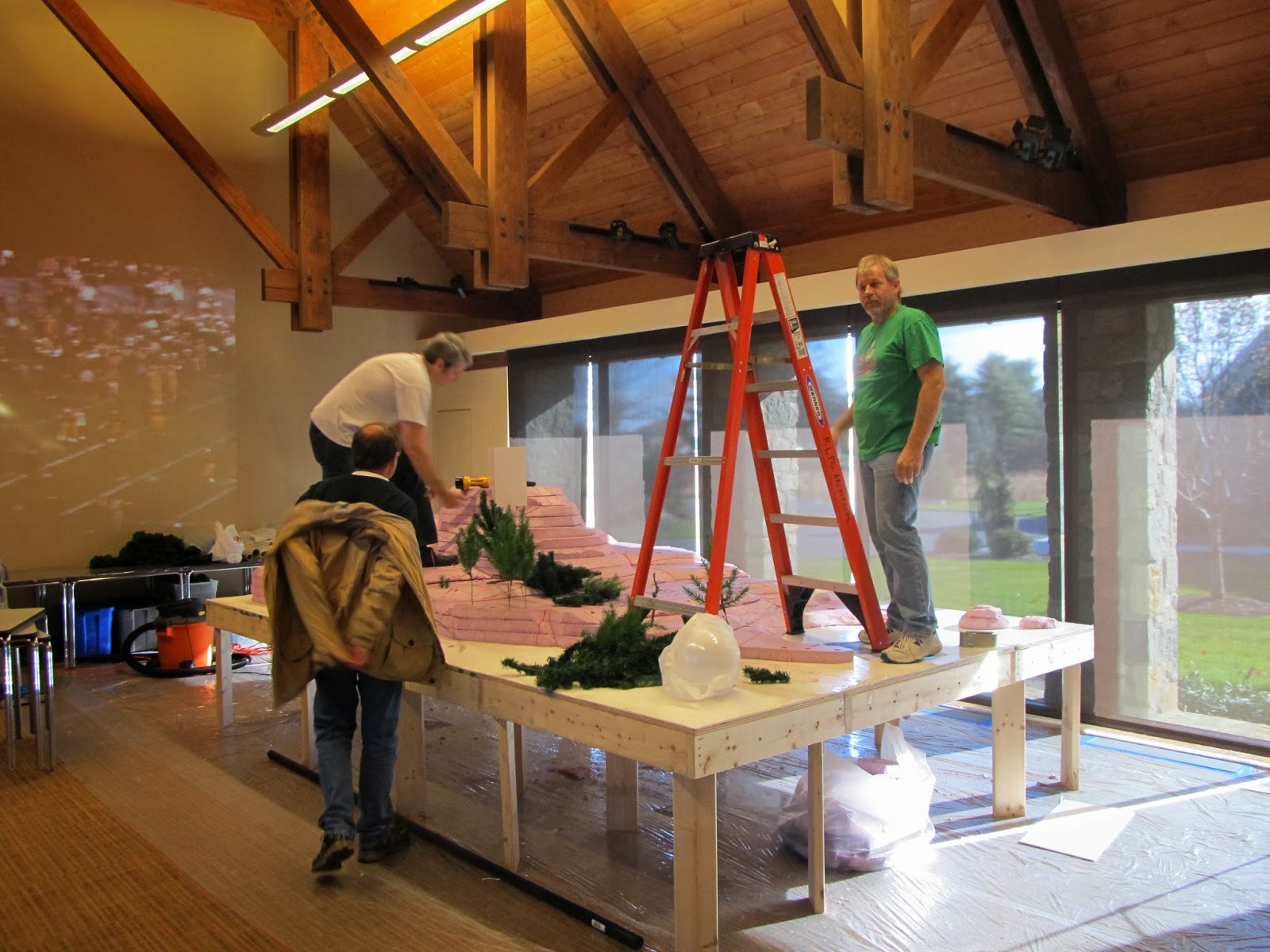 In usual fashion, we covered the plywood base with 2 inch rigid insulation to create the required topography of the island.  The entire perimeter would become the water’s edge. The insulation eventually gets covered with icing or some other edible surface. 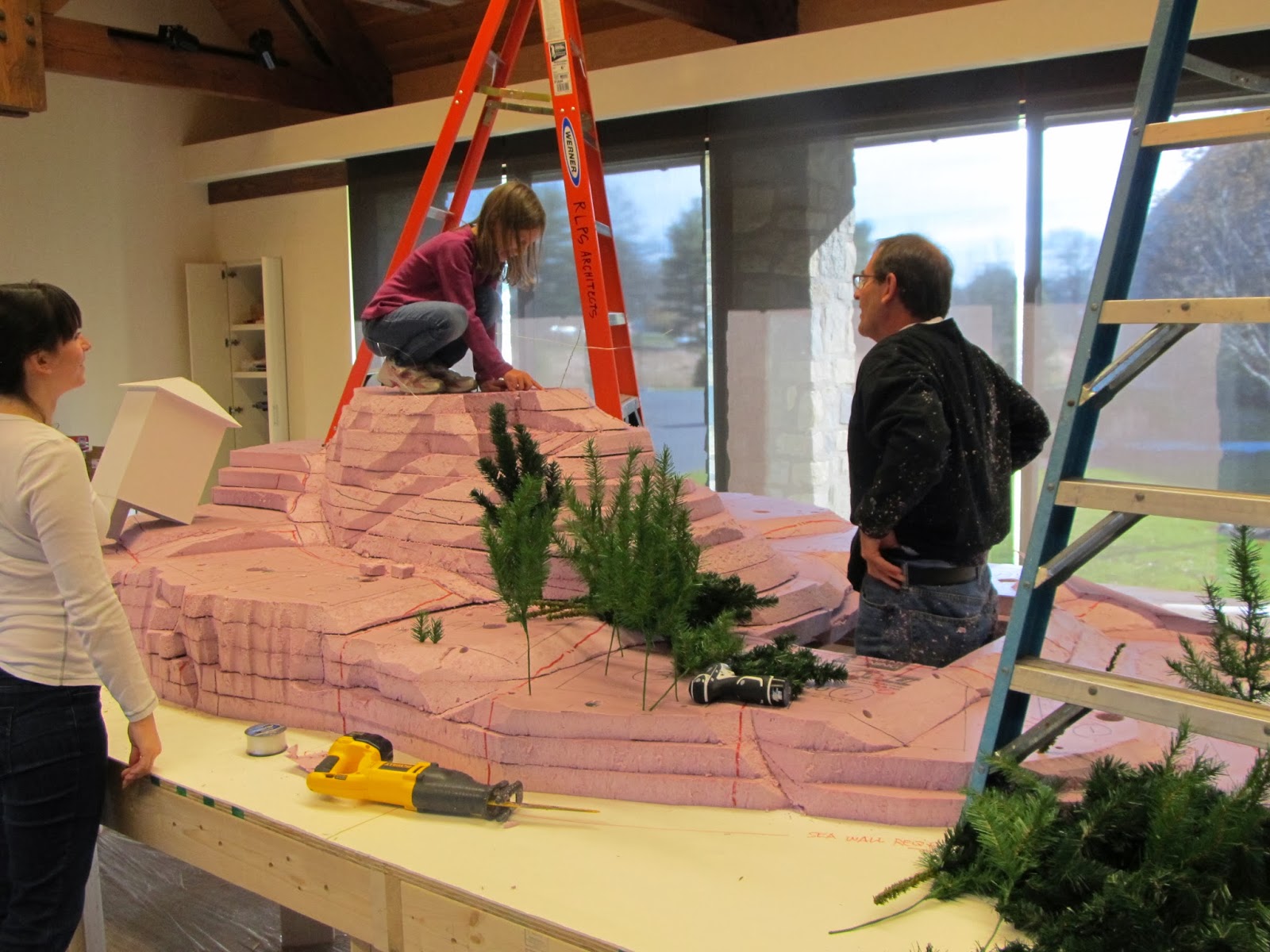 Since this display was to be a true island, a small trap door was devised to allow access to the very center so that people did not have to be suspended from the rafters, Mission Impossible style.  The trap door would eventually get covered, and a little insulation manhole cover was devised.  I am not sure why it kept getting set in place, because it kept getting stepped on.  I won’t name any names, but the guy who wrote “This is really not a step” was the second guy to step through the manhole cover. 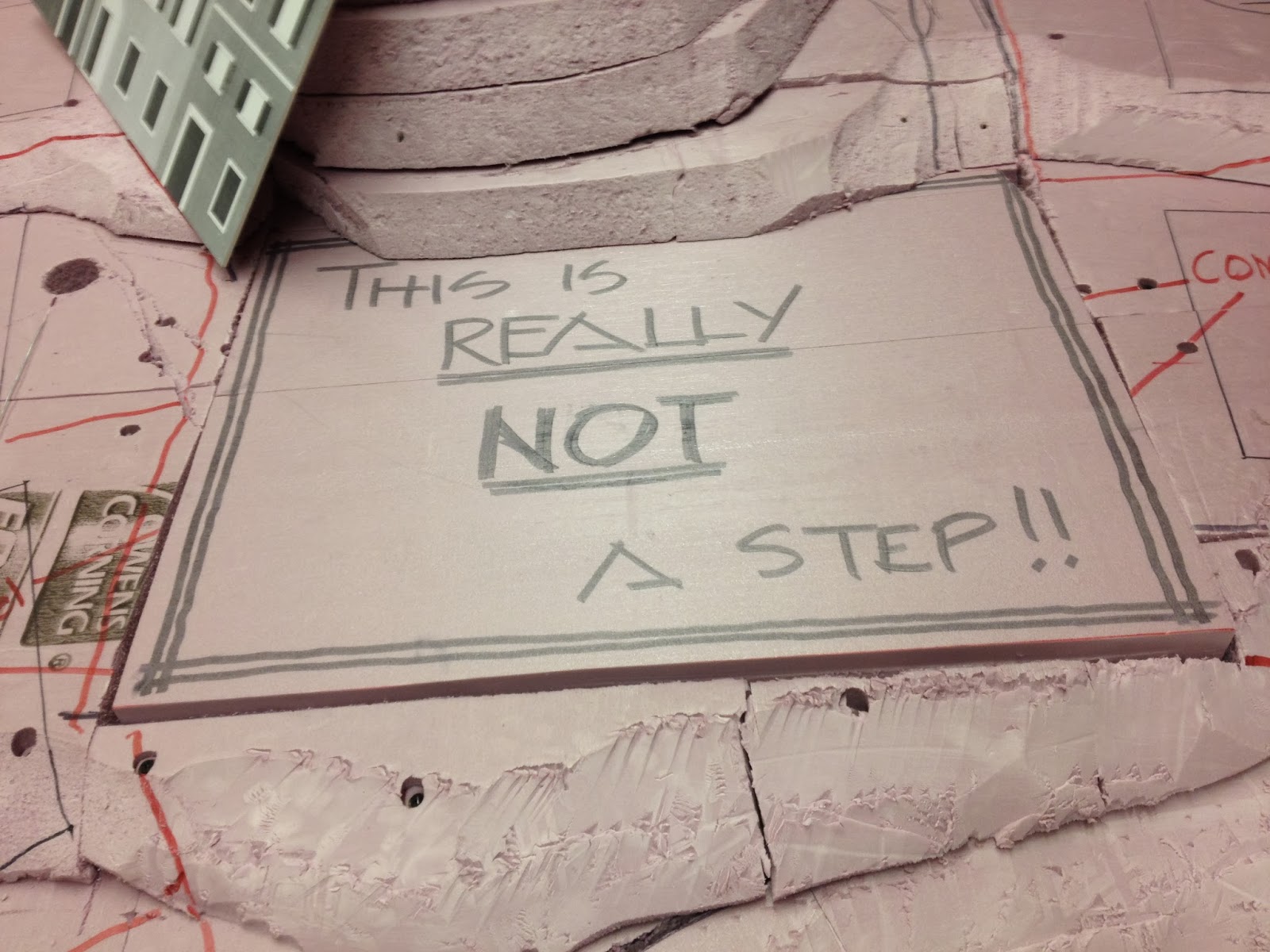 Above is the second of three successive manhole covers to top the trap door.  And below is what happens when a full sized man steps on it… 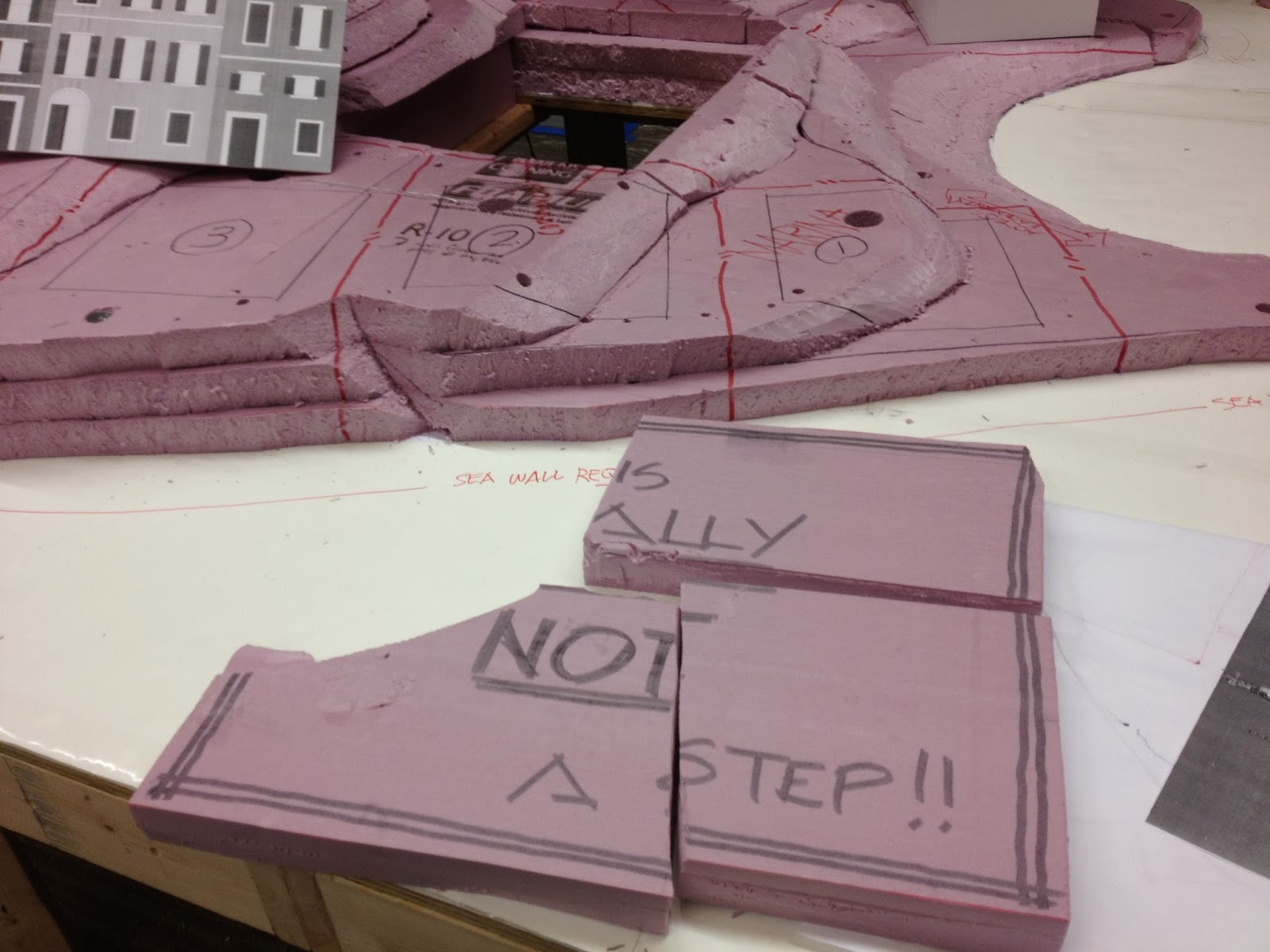 Along with all the base preparations come the background buildings.  These are typically done by the display group and many hands touch them in one way or another.  This year was to be a monastery and I worked on the cloister piece in the photo below.  I got some loose sketches from Brent the designer based on a photograph of a real monastery.  Then, much as in my real job, I have to take these sketches and make them work in real life.  This foam base will eventually be iced and covered in crushed peanuts.  The monastery structure was probably one of the best background buildings ever built, in my opinion.  And the scent of peanuts was so strong, we started to wonder if the scent alone could trigger anaphylactic shock in someone seriously allergic, that we put up a warning at the front door. 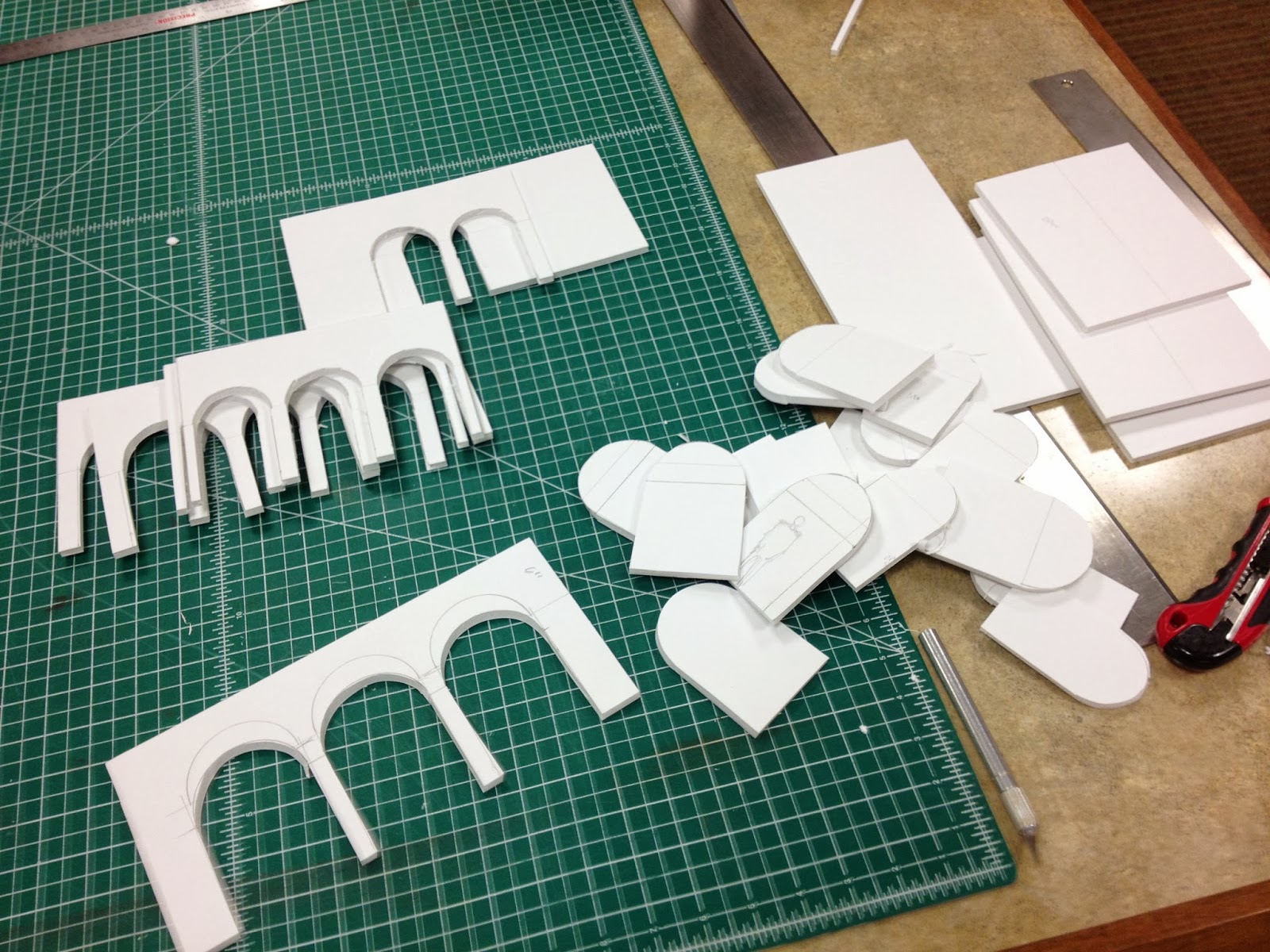 Ordinarily there is a subset of the group who has the reigns of the overall design concept for the background buildings.  We count on them to give enough direction to us worker bees to pump out the items that become the background. 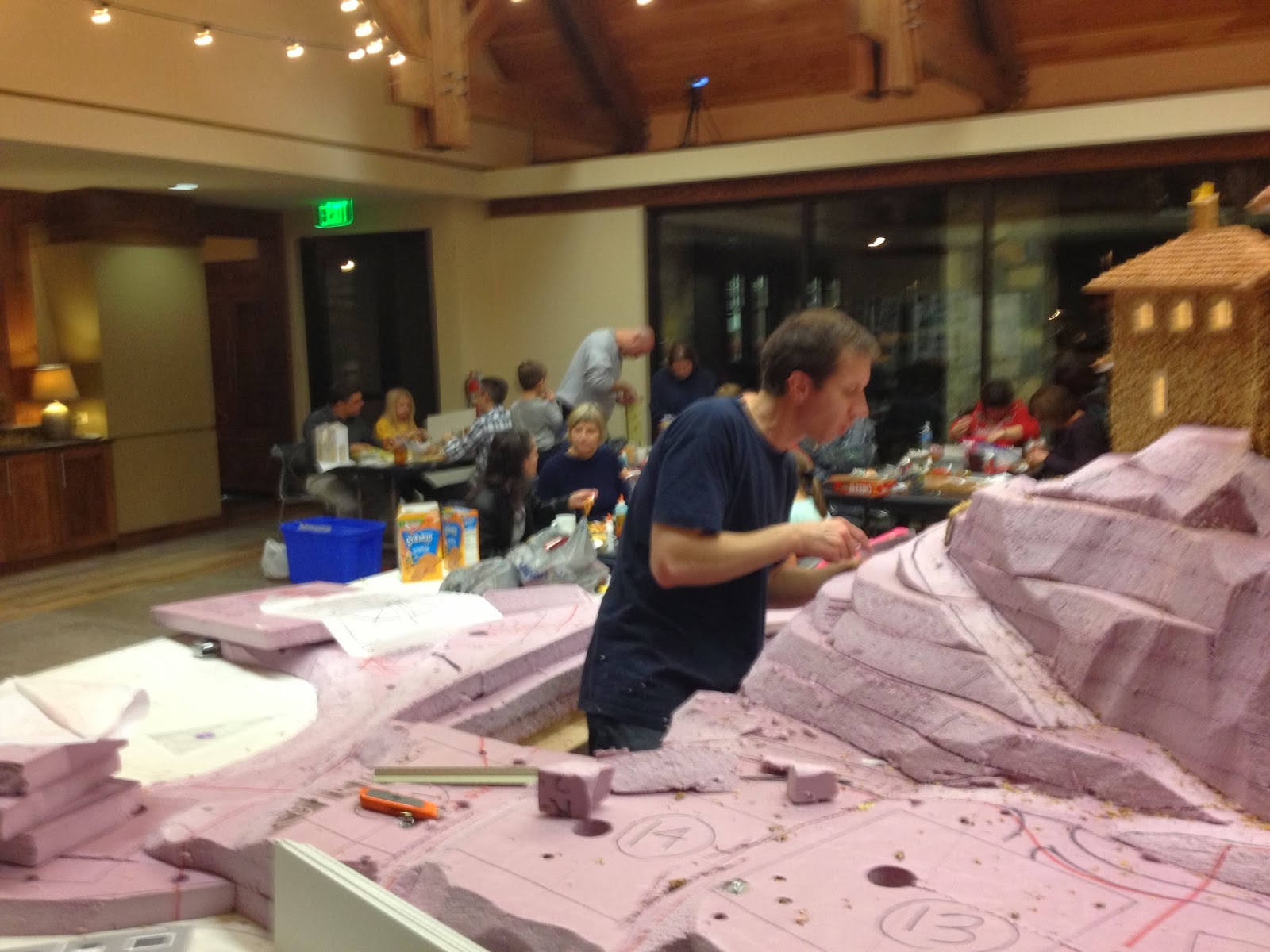 One week before the Client Party, we have Family Night.  After work all the families that care to can come into the office and work on the various parts of the display, mostly the individual houses, but some of the group continue to work on the background.  Prior to the event, the entire floor was covered in the plastic sticky stuff you see in new houses or in renovations.  A lot of the houses are worked on by entire families, including spouses and children.  Other teams are composed of multiple staff members.  They are big undertakings, so the extra help is always worth it.  The office will order a dozen or two pizzas typically.

The week between Family night sees probably the most significant amount of work on the display during that time.  It is a bit ironic because after family night, our spouses don’t see much of us until a week later.  My kids (8 and 10 at the time) LOVE helping, so they spend a lot of time with me after school and during the intermittent weekend helping out.  At this stage, they can actually contribute to the display on their own without my supervision and I can continue to work on what I need to work on.  Aside from one minor Xacto cut and several hot glue gun burns, they were fine.

The next post will address the final week and all the little details that really make the display shine.