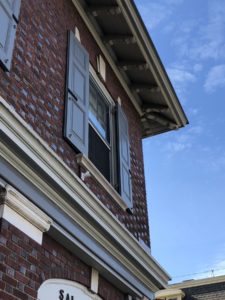 Building strong and lasting relationships is first and foremost to the career of any successful architect.   By 1908, C. Emlen Urban had designed and built a dozen different building types including private residences, churches, manufacturing facilities, a market house, a hospital, a department store, two hotels, a YMCA and even a funeral home, but never a bakery.

Orphaned and penniless, Christian Gunzenhauser arrived in America at the age of 14 seeking a new life and employment. Following 12 years of learning the trade working for bakeries in Lock Haven, Philadelphia and Lancaster, Gunzenhuser seized the opportunity to purchase the Goebel Bakery at 231 West King Street sometime around 1895.  His attention to detail, focus on cleanliness and utilization of the latest production technologies soon had his brand of breads, pastries and cakes overtaking his competitors.

Gunzenhauser’s rising success afforded him the opportunity to retain Urban to design a new residence at 250 West Orange Street for his expanding family. In addition to sharing an entrepreneurial spirit, Urban and Gunzenhauzer shared membership in the Lancaster Elks Club. It may have been this connection that led to a business relationship that spanned well over a decade. 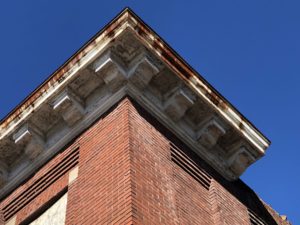 The three-story Gunzenhauser residence is a unique blend of Georgian, French and Italian Renaissance Revival styles. The Georgian details include the distinctive Flemish bond brickwork, shutters and keystones, however the keystones feature unusual corner blocks. The French influence is found in the steeply pitched and flared hipped roof, while the Italian Renaissance references are the exposed rafter tails and hipped dormer details. The floor plan included servant’s quarters, a wine cellar, a provisional cellar and dedicated laundry spaces reflective of a family with wealth and means.  Urban drew upon his four years of experience with Philadelphia’s controversial architect Willis G. Hale to create this eclectic and rather unorthodox blending of architectural styles.  With the exception of the once open front porch, the building’s exterior is completely intact, 110 years later!

Urban also designed many of Guzenhauser’s bakery plants, horse stables and wagon sheds to house and support his growing operations throughout Lancaster City and perhaps as far away as Harrisburg. The Gunzenhauser story is another example of Urban’s ability to not only secure commissions but also to sustain lasting relationships.