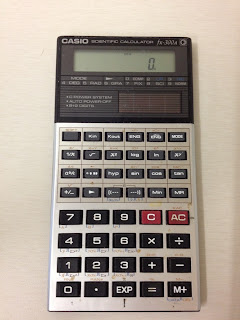 I’ve had this one calculator since the late 1980’s.  It is lightweight, thin and has never malfunctioned in the twenty years I’ve carried it around.  It does everything in need it to do, and several functions on it that I haven’t used since I had a calculus class.  Here’s the kicker – I have never had to replace the battery.  It is solar powered.  Check that – it even works under a light bulb.
The solar cell on it is just a tad more than 1 square inch.  The overall thickness of the entire housing is a quarter inch at its thickest.  I’ve had this durable and dependable technology since the tenth grade, yet I still have to heat the water in my house with petroleum products.  You would think that the implementation of this power would have advanced in this generation, but it seems to me that much of the solar energy hitting the earth is just plain wasted, short of the solar calculator on my desk.
I’ve often wondered about other kinds of wasted energy.  What about the kinetic energy exerted at the gym?  It seems that the treadmills and stair climbers could easily be harnessed to run the lights inside the facility.  Where does all that energy go, other than being converted to heat, which makes the operator run their air conditioner more in the summers?  There has been a renewed effort into placing buildings to passively exploit the energy of the sun, but when I was in school, many of us dismissed this as “hippie talk”.
I am guessing that many people have seen the children’s experiment where the chemical properties of the potato can be harnessed to run a small clock mechanism.  Or how about placing a mint candy into a diet cola that produces a huge release of carbon dioxide (I guess this is not a great thing for the environment, but let’s use it as an example).  Having been raised in Lancaster County, I’ve learned not to waste things.  I’ve got to think that there are more things we can do as the designers of the built environment that capture the spirit of my Casio Scientific Calculator.
On a slightly off kilter note, I purchased a rotary mechanical calculator, “the Addometer”, which works only on the power of the user, from EBay.  I had seen some of the more experienced guys using these in the office.  These babies have the lifespan of a giant tortoise, and can add fractions much more quickly (than in my head, not by a tortoise – I don’t have any empirical data on the tortoise).