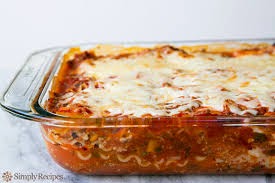 Sometimes, very complicated and technical rules may boggle the mind, but sometimes they can be demonstrated very easily in the average person’s kitchen.  One such “experiment” demonstrates galvanic corrosion, which is the reaction certain metals exhibit when they make contact with each other in the presence of an electrolyte.  More simply stated; when metals get rained on and overlap each other.  This rather tedious sounding process can be explained in a very tasty way, in fact.

The demonstration is commonly known as the lasagna battery.  Try cooking a delicious (and salty) lasagna in a steel baking pan, then cover it with aluminum foil.  In a few hours, you will see small holes developing in the foil where it is in contact with the food.  You will also see spots on the food where the aluminum has apparently dissolved. The two metals are placed into an electrolyte (lasagna).  Since the aluminum is lower on the electrochemical series, or less noble than the steel, the foil actually ionizes due to a rapid chemical reaction charged by a small electrical current.  This is why you have to be careful when you have one metal on a roof or wall in contact with a different metal composition in the presences of an electrolyte (rain water is enough).  Value Engineering metals can be hazardous to a roof’s health! 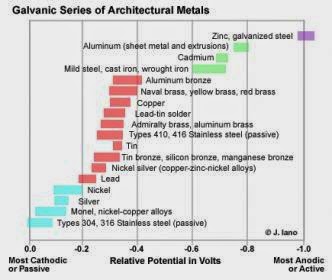 But don’t feel bad.  Even Gustav Eiffel got it wrong.  Over time, the shellac between the copper skin of our Statue of Liberty failed over time, allowing the iron pins to come into contact with the more noble copper.  Maybe old Gustav knew this would happen over time and, as the relations between the two nations cooled, Lady Liberty began to disrobe.  Our government fixed the problem, replacing the shellac with Teflon, properly insulating the two metals. 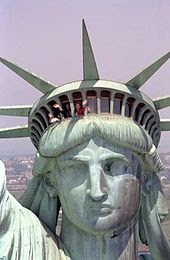