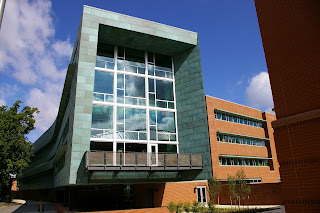 It was the end of an era.  They tore down the Architecture building at Penn State.  It was actually an action long overdue, having been a temporary situation for several decades.  The fact that the buildings’ name was the Engineering Units (“A” through “E”) reinforced the fact that this grouping of five brick cubes were never supposed to house the Architecture and Landscape Architecture programs.

The buildings were ill suited for human occupation.  The first sense one had entering the buildings was a strange odor that I liken to a combination of pencil shavings, wet paper towels and body odor.  The scent permeated every square inch.  It was not air conditioned, but that was ok because it had huge windows to let the glare of the sun in.  The breezes, if there are any in August in State College, were conveniently blocked by the buildings surrounding it on almost all sides (you could really mess with the students in those other buildings with a laser pointer, though).  In the winter, the heating system kicked out a pleasantly cool air, so in case you fell asleep at your desk, the sound of your own chattering teeth would wake you up for class at 8 AM.
Because of the building’s condition, the administration didn’t hassle us about its condition.  Each student customized his or her own space.  Sometimes that was as simple as moving things around, but others brought in lumber to get the job done.  Late nights saw all sorts of hi-jinks, from the mundane of climbing to the roof to see the sunrise at 5 AM to lighting models on fire and dropping them three stories.  Pets were welcome, although I am sure one janitor disagreed when I saw him clean up what I only hope was a pile of dog turds in the stairway.
I know that at least one person who made the Engineering Units his actual home for a semester.  He had either lost his apartment or couldn’t afford it any longer.  He slept in the lounge on the disgusting couches next to the copier and vending machines.  He said he showered at Rec Hall, but nobody believed him.  No one ever kicked him out.  Walking by that lounge late at night, I’ve seen much more explicit activities on those couches than that.
The Engineering Units were more of a home to us for five years than anything else at Penn State.  While I am jealous of the new students coming into to a brand-spanking new building, I do feel bad that they won’t have the experience of living in the dump we all loved so.  The location of the Engineering units was ideal, but the new students will have to walk 20 minutes to grab a beer at Zeno’s Bar or pick up junk food at the Uni-Mart.  I guess that is the price you pay for having a new building.  Maybe the new students will end up being healthier at the end of five years.