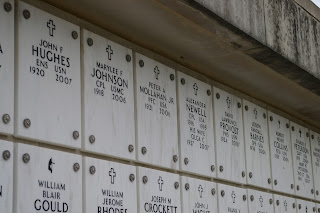 I was given the opportunity to visit Arlington National Cemetery last summer on my own (meaning no kids to “enhance” the experience).  I was looking forward to finding the resting place of my grandfather’s brother, Peter, who served in the Second World War in the Pacific.  He was part of the invasion forces Saipan (specifically Guam) and the occupation forces in Okinawa.  It took quite a while after his death for the government approved his request to be laid at Arlington, and the internment took place very quickly thereafter, so I was unable to attend the memorial service there.  So I was looking forward to finding his marker and paying my respects.
I found what I thought was his location in the cemetery from the welcome center.  But I was woefully wrong.  I ended up walking in circles and as it turned out, was nowhere near his location.  But had I not been so lost, there would be no story…
I had decided to go back to the welcome center to see if I could get some help locating Pete.  It had been a beautiful day in Virginia, but it seemed that some rain storms may threaten my walk.  I had been walking for hours and was worried I may have missed my chance of finding Pete on this day.  But on my way back, I encountered an older gentleman sitting on the edge of his car’s seat with the door open.  It looked as if he may have needed some assistance, and he waived at me as if to confirm my suspicion.  As I approached nearer, I noticed he had flowers in his right hand and a cane in the left.  As I walked up next to him, he asked me if I could help him get to his wife’s grave.  Even in my haste, I wouldn’t refuse a request like that.
It turns out his wife’s grave was only a few yards from the road, maybe 15 yards.  I held his arm steady as he bent over to place fresh flowers at her headstone.  I noticed her name, and “wife of” Major General John W. “Jack” Huston, ASAF.   I asked, quite dimly as I look back on it, if that was him.  Of course it was him.  Well, when I helped him return to his car, we started talking.  I told him of my intended quest that day and he told me a little about how he came each week to place flowers at his wife’s grave.
He asked what I did for a living. As it happened that I was working for another retired USAF Major General, as she was the director of the retirement community for which I was currently doing an addition – Falcon’s Landing – the Air Force Retired Officers Community just outside of Washington, D.C.  He knew all about the community.  I told him I was from Lancaster and went to Penn State and it turned out he was from Pittsburgh originally.  He mentioned that he was on an advisory group for an architectural project, I believe alongside of Lady Bird Johnson (whom he said was “just a lovely woman”).
He offered me a ride back to the welcome center in his car.  As I accepted, it dawned on me that I just effectively hitch hiked with a guy that couldn’t walk 15 yards.  I hoped the speed limit on the cemetery grounds would prevent a high speed crash.  I sat in the back seat because the front passenger seat was filled with stuff, including magazines, books and, poignantly, many empty gravesite flower stands.  But as it turns out, he dropped me off at the welcome center without incident, we exchanged some warm fair wells, and he drove off and I returned to the welcome center and received the correct directions to my Uncle Pete’s mausoleum building (not grave, he was cremated, which I didn’t know).  After I found Pete’s marker, I looked up Jack Huston on my smart phone out of curiosity.  I discovered he had a professional biography on the USAF’s official website, as most General Officers have.
I found the older gentleman I helped was a WW II veteran.  He was the navigator for a B-17 crew and flew 30 combat missions.  Regarding the 30 missions, it was customary to only to fly 25 missions before being rotated home, but Jack flew five more.  It was nearly statistically impossible for crews to survive 25 consecutive sorties based on the massive losses in the European theater.  Through the rest of the war, he instructed navigation to airmen back in Kansas.  Subsequent to his service during wartime, Jack continued to train troops, worked in intelligence operations, served in various policy positions and finally as the Chief Historian of the Air Force.  A web search will reveal numerous books that he wrote or edited about Air Force history.
I consider myself to be lucky that I got myself lost and was able to provide a very small favor to such an admirable man who served our country.  It just goes to show that doing a service to a stranger can end up paying in ways that aren’t imaginable at the time.  I was looking to pay my respects to one hero, and ended up finding two.
Jack Huston Bio