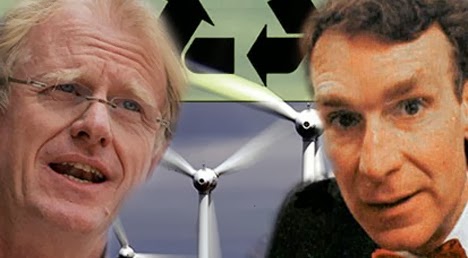 Normally, I read about “green” celebrities with a lot of cynicism.  These people do all they can to make their $400,000 Bentleys get just over 15 miles to the gallon, or install compact fluorescent lights in all five of their 10,000 square foot homes.
I recently read, however, of a friendly competition between the actor Ed Begley Jr. and Bill Nye the Science Guy.  Apparently, Bill moved into Ed’s neighborhood and started to meddle with his new home in order to make it as energy efficient as he could.  Obviously, Bill had some catching up to keep up with the Begley’s.  Ed already powered his house with wind and solar power, composted nearly all of his own waste, and most impressively to me, the Emmy nominated actor does it all in 1,585 square foot home.
Bill has technology on his side, however.  Solar panels, for instance, are far more efficient today than they were 20 or 30 years ago.  As for Ed’s current solar panel, how would you justify throwing his current solar panels into a land fill when the currently produce “free and clean” energy, just not as much as new ones.  Even with such an advantage, it would seem to me that The Science Guy will have to work hard to match the Begley’s measly $300 per year electricity bill.
The fact that Bill and Ed are trying to out do each other in this arena instead of trying to “out-bling” each other was refreshing to me.  Yet it is in of all places, where even several former governors were movie stars.  And while these two guys are a bit nerdy, maybe, you can count on them to be good, solid, American capitalists.  You can purchase cleaning solution from Ed Begley Jr.’s website and know you are helping to pay for Ed’s electric bill.