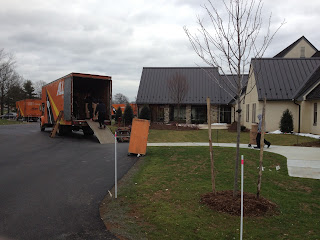 Having had the realization that I have spent more than forty percent of my life here at RLPS, I had cause to look back in retrospect. To put it another way, I’ve spent as much time in this institution as I did in school, including college. I was introduced to life here as a summer intern, working on a presentation model for Reformed Church, and I was under the tutelage of the “professor”, Mark Schlenker. It was a full time job for the two of us and one other intern. There were more layers of paint on that model than on the Golden Gate Bridge. I think I saw the striped of colors in my sleep at night. By the end though, it was a good learning experience, teaching me something about massing, color and rhythm. However, when I found out the cost of that model, I about passed out. It was more money than I would make in my first year out of school. That also taught me something. My first assignment as a full time employee included a renovation to a skilled care facility in Allentown. It was an odd project in that never had an executed contract, and the G.C. was on board to help make informed decisions on the design of the building. They literally were building while we were designing. The facility had deficiencies as well as next to no floor to floor heights to contend with. I tend to think that most of the design in that building was done in the job trailer. People kept leaving the project; the executive director and the director of nursing left for other jobs. The landscape architect, the superintendent and the lead electrical engineer left and, unfortunately, even the president of the construction company died. At the end it was just me and the Owner’s project manager remaining as original team members. Consequently, we have already undertaken a renovation of that renovation I worked on then. That made me think. This was not the first job I’ve worked on to have lived out its expectant life span and has been updated again. As it is, I am still considered more or less a Johnny Come Lately here, and I can appreciate that. Some have been drawing here at RLPS as long as I’ve been drawing oxygen. But this year, to shake things up a bit, we moved out of our old home and into these new digs. Everyone should do that every 30 years or so.