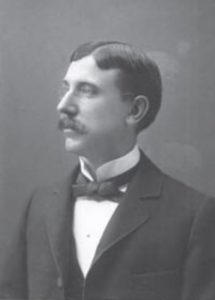 Cassius Emlen Urban’s 53-year career was nothing short of extraordinary and his contributions were immeasurable.  He singlehandedly introduced Lancastrians to a new vocabulary of bold and sometimes uncomfortable architectural styles.  Prior to Urban’s arrival in 1884, red and brown tones comprised the downtown Lancaster color palette and the architectural styles were predominately Queen Anne, Georgian and Federal.  This quickly changed in 1892 when Watt & Shand debuted Urban’s French Beaux Arts style department store in the heart of Penn Square. One by one, other city merchants retained Urban to help them advance their own images.

The next 30 years saw a dramatic transformation in the scale and texture of the downtown landscape including French Baroque, Italian Renaissance, Perpendicular Gothic, French Renaissance, and fresh interpretations of Romanesque and Greek Revival.   But what do we really know about the architect behind the pen?   How did he do it?  What made him tick?  Did he ever sleep while designing more than 273 buildings?

We do know that Urban was the second child born to Conestoga residents Amos and Barbara Anne Urban on February 20, 1863.  His formal education ended after graduating as the valedictorian of his high school class, followed by a four-year apprenticeship with two unique and well-established, but completely different architects in Scranton and Philadelphia.  Shortly after starting his private practice in 1884 at the age of 21, Urban married Jennie Olivia McMichael in her parents’ home at 28 East Lemon Street. He was 23 and Jennie was 24.  The couple moved to 141 East New Street to begin their life together and raise their two children:  Miriam and Rathfon.  Rathfon and Urban’s younger brother Christopher Urban, and nephew Frank Urban were employed by Urban over the course of five office relocations in center city. Beyond these gentlemen and his head draftsman, Ross Singleton, little is known about his office personnel. 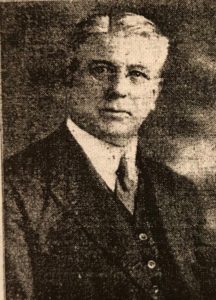 What Urban lacked in physical stature at only five feet, six inches tall, he more than made up for in his larger than life personality and engaging blue eyes.  His social and business connections in the community were second to none, holding court with notable local figures including Milton S. Hershey, Peter Watt, James Shand, Herman Wohlsen, Christian Guzenhauser and Congressman William W. Greist.   Research to date has come up short on a significant number of portrait or family photos, with a grand total of five found so far.  We do know he traveled extensively to Europe, South America and the Mediterranean from 1911 through 1934, which were also the most prolific years of his practice.  Although his public designs were quite progressive, his style preference for the two residences he designed for himself was the conservative and understated colonial revival.

Under the heading of trivia: on November 16, 1911, the Lititz Record reported that Urban, an “excellent fisherman”, landed the largest bass ever recorded in the Susquehanna River at Peach Bottom.  Weighing 6.25 pounds “he lifted the fish with pole and reel and fed a multitude of Urbans.”  Unrelated, the October 6, 1934 edition of the Gettysburg Times reported that his Buchanan Avenue home was burglarized by a 21-year-old suspect from Atlanta, Georgia!  And lastly, to his grandchildren, he was known as Baba!

His final commission was documented March 15, 1939 for East Orange Street resident John S.  Groff, almost 80 years ago to the day of this article.  Urban passed away two months later on May 21, 1939 at the age of 76 and is buried at the Greenwood Cemetery in Lancaster, along with his immediate family.  The understated granite headstone simply says – URBAN with the incised biblical verse: “UNTIL THE DAY BREAK AND THE SHADOWS FLEE AWAY.”

Author’s Note: It has been an honor to share C Emlen Urban’s story with you these past two years.  A special thank you to his great granddaughters, Miriam and Alexa, for their insightful contributions and Deb Oesch and Alex Kiehl for their incredible discoveries and research assistance.

For this month’s full article and photos:  Tying up the life of a legend: architect C. Emlen Urban and links to previous articles in the series, visit LNP On-line.