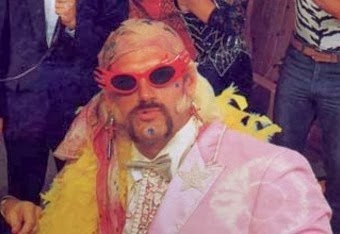 I am not sure when people actually go crazy. I am pretty sure one clue is when you think you know everything about everything. I hope that I remain aware enough to know that I will never know it all. Recently I heard a radio interview with Former Governor (and wresting star) Jesse Ventura about his take on the World Trade Center Tower failures. I am not sure if he spent too much time under water in the Navy, was dropped on his head too many times in the ring or spent too much time around people in Minnesota who can not pronounce their O’s correctly, but he is a lunatic.

The Body is convinced that there was some sort of conspiracy involving the owners of the buildings to “get rid of them”. He also believes there was some sort of controlled demolition in Building 7. I didn’t catch the whole interview, and perhaps some of what I am reacting to in somewhat out of context, but….WHAT??? His argument was that these buildings were designed to withstand the impact of a Boeing 707 and should not have collapsed as they did. Okay. Let me reach for my U.L. rating book and find that wall design. Hmmm. Okay, there are no airplane proof assemblies listed – how about a column rating test that will withstand the heat of thousands of gallons of jet fuel combusting virtually instantaneously? Hmmm. I am guessing that the temperature inside the buildings at impact of the planes exceeded 1000 degrees after 15 minutes and 2000 degrees after 240 minutes and that would exceed the ANSI guidelines for testing fire resistance of an assembly. That test also does not account for tons of debris ripping off the fireproof covering and devastating the structural system without the aid of any heat. Each tower stood for over an hour after impact. That in itself amazes me to this day. How anyone expected more, I do not know.

I am no forensic engineer by any stretch of the imagination. I don’t know everything. In fact, I know that I know very little about that science even though I do know a bit about buildings. But I do know to keep some of the crazy thoughts that go on inside my head right where they are. No need to share. Some people need their windmills to chase, I guess.

As MIT professor Noam Chomsky recently quipped about this very subject, “There happened to be a lot of people around who spend an hour on the internet and think they know a lot about physics, but it doesn’t work like that.” If it did work like that, I’d have a PhD in Caddyshack quotes or whatever else I’ve invested an hour into lately on the internet.