Eminent domain is the power of the government to take private property for the use of the public, following just compensation.  It has been a hot topic in years past.  I fell upon a documentary film on TV recently describing the battle over 22 acres of low-rise residential and light commercial privately owned real estate in order to bring the New Jersey Nets stadium to Brooklyn, called Battle for Brooklyn.  The film follows the residents and local groups who began a grass roots organization called Develop Don’t Destroy Brooklyn to fight the development, led by a corporation from Ohio and star architect, Frank Gehry.  And if Gehry isn’t enough star power for you, Jay-Z and Beyonce flit in an out of the story line, and of course become part owners of the Nets. 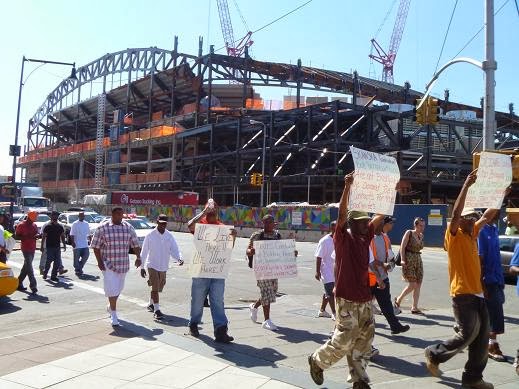 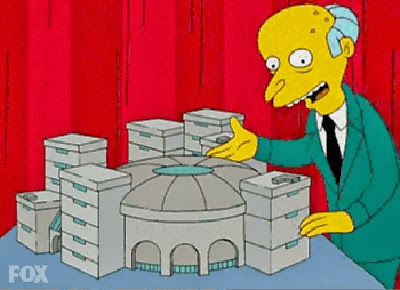 An Artist’s Rendering of the Developer.

The concept of eminent domain is not new.  In Biblical terms, King Ahab of Samaria is said to have paid Naboth for the taking of his vineyard.  Quite frankly eminent domain will often benefit architects, as it typically turns into large building projects.  For instance, Pope Julius II was a remarkable patron of the arts and architecture, and transformed Rome from a network of medieval neighborhoods into the Eternal City of the Renaissance that we know today.  Subsequent leaders up to and including Mussolini expanded on creating these broad avenues that connect major focal points of religious and secular importance, which were once residential living quarters of the common Roman.

Napoleon III commissioned Haussmann’s Plan for Paris in the mid-1800’s, restructuring the boulevards and creating new public parks and regulating the facades of buildings along the major axis.  While this plan created the organization of Paris that not only reformed Parisian life, but it also influenced urban design around the world for centuries.  During the reorganization, however, the new paths of public domain cut through the dense medieval context like a hot knife through a croissant, displacing its residents. 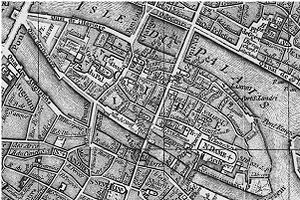 The Medieval City of Paris 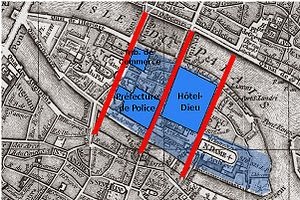 A small part of the Haussmann Plan

Both of these plans were backed by the State.  In many cases the plans were executed by private developers propped up by loans from the government (otherwise known tax payer money).  And while I don’t have the records of whether the former inhabitants were paid fairly, my guess is there was little room for negotiation in 1500’s Rome or 1850’s France.  The legacy of these plans is undeniable, however.  Who can imaging Rome or Paris without the organization it has as a result of Julius II or Napoleon III?  Not until the times of Corbusier did we see reactions to this type of urban planning, where of course Corbu proposed bulldozing most of central Paris in favor of his idea for an urban center.

The Atlantic Yards Project, as the Brooklyn Nets arena and complex came to be known as, is a little different than the State taking away private property to directly serve the welfare of the public.  This was a private developer (Ohioan Bruce Ratner) seeking public funds to turn around and develop a section of Brooklyn that currently had housing and businesses within the footprint, in order to serve Brooklynites with an arena, mixed-use commercial and housing (some of it low income).  The only thing missing in this area of Brooklyn prior to the redevelopment was the arena, minus Jay-Z.  But the developer had to prove that the area was blighted to get it condemned.  In the documentary, I found it hard to believe that all 22 acres were blighted, but the film follows the rubber stamping of such recommendations, all the way to the NY Supreme Court.  Eminent domain was a concern of the founders of this country, protecting the citizens with both the 5th and 14th Amendments to the U.S. Constitution, at the very least giving property owners the right to due process and fair compensation. 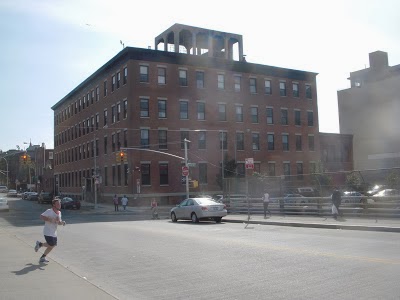 A newly renovated “blighted” building that needed to be torn down.

The protagonist of the documentary is a single home owner named Daniel Goldstein.  You follow his life as he stands up to the Goliath-like developers and politicians pushing this plan.  You see the struggles and triumphs not only of his opposition efforts, but of his personal life and how his efforts affect his relationships with family and visa versa. 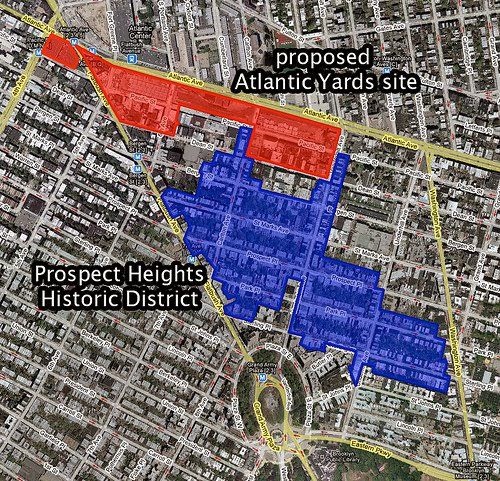 Blighted property directly across the street from designated historical properties?

I don’t think I am spoiling the plot by letting out that the Nets did move into their arena and that during the development phase, the economy tanked.  Needless to say, only a very small fraction of the development plans for the 22 acres is built at this time, over ten years after the start of the planning in 2002.  Only recently were there any plans for any of the housing to replace all the units razed in advance of the arena construction.  The developer first blamed the economy and then did the only rational thing in response to the economy, fired the architect (shocker).

Even though the arena was built and the fight was lost, the film is a very captivating look into a very small group of people fought for one of the most American of rights – land ownership.  For six years they struggled against this apparently government sanctioned land grab.  Even though the arena was eventually pushed through, we see the struggle to get due process through the eyes of someone on the ground, whose property literally was center court to the fight.  See the film.  You can decide if the public good outweighed the rights of the property owners who were displaced.