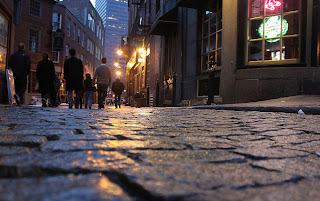 Having had the opportunity to visit Boston with my family some time ago, I came to appreciate the trials and tribulations of those with disabilities much more than I did before.  It was our first vacation with a baby (with stroller in tow), so we picked Boston because it is “America’s Walking City”.

Almost all of the sidewalks are paved with bricks, which are not ideal for those plastic wheels on the stroller, but some of the paths are paved with quarried stone cobbles which were basically nonnegotiable.  Any public building, especially the historic ones, were elevated from the street level.  If you were lucky, there was a handicapped entrance on the other side of the building, but in many cases, it was easier to pull the baby out of the stroller and carry everything up the steps.  So maybe public transportation was the way to go…
Most of the subway cars in Boston’s famously tourist friendly trains system have no elevators down to the train levels.  The trains themselves even have steps up to them.  Try carrying a stroller and a baby up onto a packed subway car.  I almost fell on my face once (don’t worry, I was carrying the stroller and not the baby).
The point became crystal clear when we were sitting in a public market, and a man with serious physical disabilities rolled up to us on his motorized wheelchair.  The brick and stone paving which had been menacing us all week with the stroller was part of his everyday life.  As he spoke to us, I recalled our difficulties with the stroller and imagined how this man who did not have the use of his legs and only limited use of his arms, managed.
As we design buildings, we’re always taught to put ourselves in the place of those using the buildings.  I think in the future, I will be even more sensitive to the invisible struggle that takes place on a daily basis for those who have mobility limitations.