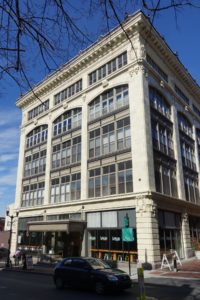 In 1910, the Hager family knew they had to do something radical if they were going to survive in the competitive Lancaster City department store business.  Their claim to being the oldest continuously operating department store in the United States did not sufficiently impress consumers who were attracted to the new shopping experience offered by Watt & Shand.  Additionally, new stores were being planned for M. T. Garvin and Reilly Brothers and Raub.  Interestingly, the Hagers commissioned , C Emlen Urban, the very same architect that Peter T. Watt and James Shand had retained to reinvent their store a decade earlier!

This time, however, Urban was able to take advantage of the benefits of structural steel construction, allowing for larger window openings and virtually column-free floor space.  This revolutionary new construction method transformed the way buildings looked and performed. For a department store, this meant superior natural lighting to showcase merchandise and open floor plans for customer convenience. 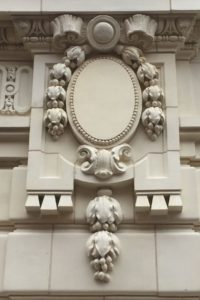 Until the advent of structural steel framing, commercial buildings in Lancaster were masonry, load bearing structures with restrictions on height, window and door openings.  The Hager Department Store changed all that and ushered in a new era of taller, lighter and more impressive buildings in the downtown. On March 22, 1911, The Lancaster New Era heralded the transformed five-story commercial building as “the best example of modern department store building construction in our State outside of Philadelphia and Pittsburgh.”

Urban was careful, clever and deliberate with his choice of materials to clad Lancaster’s newest building. He chose the traditional detailing associated with the French Renaissance Style to acknowledge the past, but melded it with modern details of the emerging Chicago Style.  White glazed terra cotta blocks, ornate medallions, embossed metal panels, large plate glass windows and cast iron columns that were topped off with a decorative pressed metal cornice created an imposing presence on West King Street.

The full-story and photos are available at LNP online:  Lancaster City’s Hager Store Ushers in a New Era of Modern Architecture