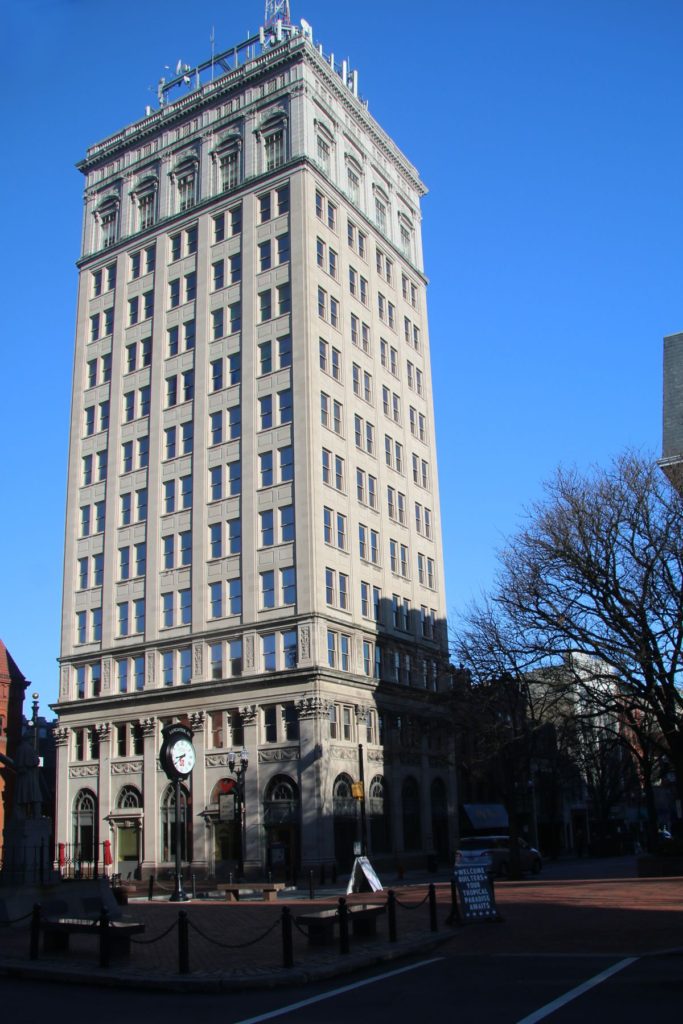 On January 19, 1914, Milton S. Hershey wrote an unsolicited letter of reference to U.S. House of Representative William Walton Griest espousing the merits and talents of Lancaster’s young architect C. Emlen Urban.  Hershey concluded the endorsement by stating, “We have a great deal of confidence in his ability as an architect and can safely recommend him as being very capable and very honorable in his line of work.”   Ten years later, Lancaster City would see its first skyscraper rise 14 stories above Penn Square. It would retain its distinction as the tallest building in Lancaster for 80 years.

Urban chose two of the most popular styles of the time, French Beaux Arts and Italian Renaissance Revival, to define this landmark skyscraper.  The structural steel frame permitted fast construction and had an immediate impact on the city skyline.  At street level, pedestrians enjoy Urban’s gift for humanizing large buildings through his use of graceful arches, decorative stone panels with shields, festoons, urns, pilasters and even stone rope.  The 12th, 13th and 14th floors comprising the building’s crown included a 300-seat auditorium and ballroom with a green and gold frescoed ceiling.  The exterior of the crown is a well-proportioned and beautifully detailed example of Italian Renaissance architecture with glazed terra cotta arched pediments, dentils, curved brackets, balustrades and even a lion’s head cornice.

The Griest Building’s acceptance was so profound and so fast that it quickly stole the thunder from the ever popular Woolworth Building, leading to its eventual demise.  On September 21, 1925, The New Era reported that “Time may bring other skyscrapers to Lancaster, but the Griest Building will never forfeit its claim to priority.”