Biophilia is a relatively obscure term for a basic principle – humans are instinctively drawn to nature; it nurtures, calms and inspires us. German social psychologist Erich Fromm coined the term in 1964 to describe our innate need to be connected to nature. E.O. Wilson, American biologist, researcher, theorist, naturalist and author of the book “Biophilia,” came up with the biophilia hypothesis—that the deep affiliations humans have with other life forms and nature as a whole are rooted in our biology.

Where would you rather work?

Where would you feel more comfortable waiting?

For most of us, the choices above seem obvious.  However, these choices go beyond personal preference. A significant body of research has established that connections to nature, both direct and simulated, promote health, well-being, learning and productivity.  In 1984, Roger Ulrich and his team demonstrated that patients recovering from gallbladder surgery at a suburban Pennsylvania hospital had different experiences based on the views outside their windows. Those fortunate to end up in rooms with views to a small stand of deciduous trees requested less pain medications, had fewer negative comments from nurses’ charting observations (e.g. upset and crying) and were discharged earlier than patients who following surgery ended up in rooms facing a brick wall.

More recently, a 2014 Cornell University study demonstrated that hospital nurses who had access to natural light experienced significantly lower blood pressure, communicated with colleagues more frequently, and served their patients in better moods than nurses who settled for large doses of artificial light.

And it’s not just healthcare environments where connections to nature can have a measurable impact. In office settings, studies have shown not only reduced absenteeism for employees with views of nature, but also increased productivity. This was the case at the Sacramento Municipal Utility District call center where employees with seated views to nature handled significantly more calls per hour than those with no view to the outdoors.

In a perfect world, we would all spend significant time outdoors in nature, perhaps even partaking in the Japanese practice of forest bathing. This utopia would extend to the buildings where we would live, work and play with abundant, multi-sensory nature connections in all areas. This is the ultimate goal, but the reality is that most of us spend less than ten percent of our time outdoors and many of our interior environments provide little or no connection to the natural world. This makes biophilic design principles that much more important and the reason our team strives to incorporate these values into every project to the greatest extent possible. Based on the book Biophilic Design: The Theory, Science and Practice of Bringing Buildings to Life, Stephen Kellert presents the following six key elements of biophilic design.

Amazon’s newly unveiled Seattle office rain forest eco-system is one of the best examples we’ve seen, but obviously not feasible for many organizations. There are numerous opportunities for introducing environmental elements into your interior spaces on a smaller scale such as fire features, fountains, potted plants, green walls and aquariums. When selecting window treatments, we consider orientation and incorporate flexibility to maximize natural light and views while also providing filtering capabilities where needed to prevent glare or heat gain at certain points in the day (as illustrated in the above photo from the Hospice of Delaware project). We also focus on selecting colors that reflect what people see in nature, avoiding highly artificial colors or extreme contrasts.

Beyond the “real deal,” there are also benefits to incorporating representations or simulations of the natural world. Another study by Roger Ulrich demonstrated that patients in a recovery suite following surgery responded positively to a simulated nature scene on the wall over a plain white wall or abstract artwork, with the latter actually eliciting negative responses.

In a 2008 study in the Journal of Environment and Behavior, a University of Michigan researcher reported that the presence of art posters in the workplace — particularly artwork featuring nature scenes — lowers both anger and stress levels in men. Interestingly, there was no discernable impact for women.  Based on the results of these studies and several others involving different patient groups, school age children and office employees, we recommend consideration of nature artwork for a wide range of settings.

However, artwork is far from the only option in our toolbox for incorporating natural shapes and forms into interior design features and finishes. Other options include botanical motifs, tree or columnar supports, animal motifs, shells and spirals, egg, oval and tubular forms. 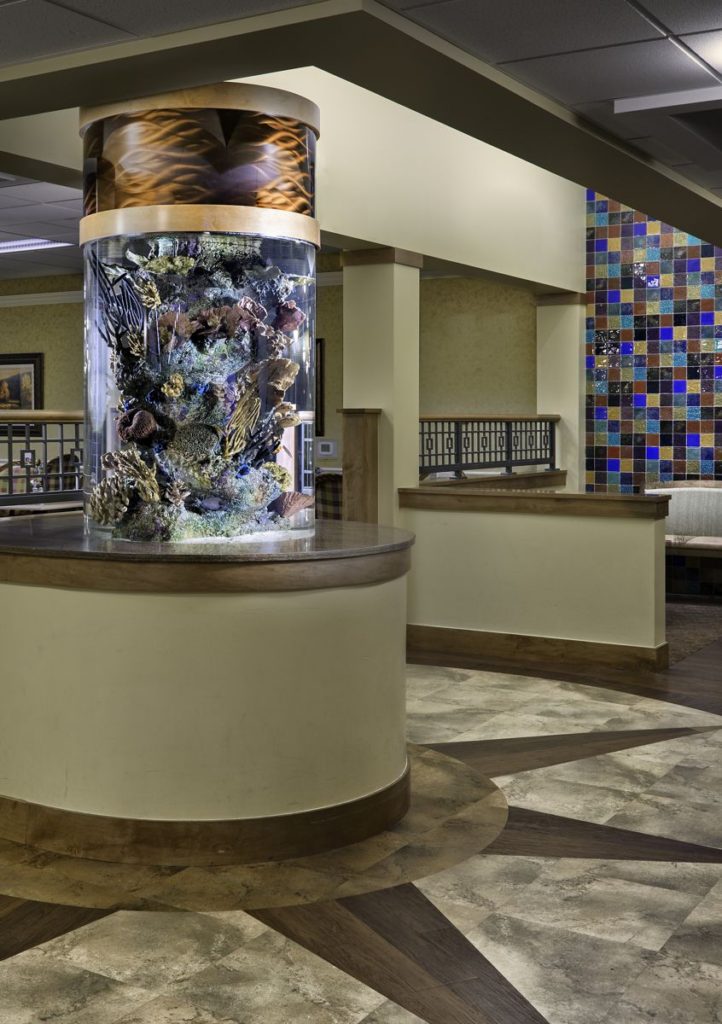 These elements take things a bit further by incorporating natural properties into the built environment rather than just simulating these shapes and forms. A good way to think about this is how a stream moves and changes over time, the effect of wind on a field or the sights and smells of rain. For interior design, this means incorporating features that provide sensory variability, information richness, reflect age, change and patina of time, and/or incorporate growth and efflorescence (gradual unfolding of a maturation process).

Specific examples could include fish swimming in an aquarium like the example at right, water moving in a fountain or a flickering fire. Another example would be a light fabric window treatment that can move with breezes coming in and allows filtered changing light to stream into interior spaces. According to Stephen  Kellert in The Practice of Biophilic Design, people tend to respond positively to information-rich and diverse environments that present a wealth of options and opportunities, as long as the complexity is experienced in a coherent and legible way. For example, fractals are a geometric form often encountered in the natural world, where a basic shape occurs in repeated but varied and predictable ways that contribute both variety and similarity to a setting.

These elements relate to the qualities of light and spatial relationships, valuing natural light over artificial forms while also including elements such as diffused or reflected light, shadow, spaciousness, spatial variability and inside/outside spaces. Our team coordinates with the electrical engineers to provide multiple lighting sources, dimming capabilities and in some cases, tunable LED lights that gradually transition from blue light in the morning to red in the evening to mimic the way that natural light changes throughout the day and supports the body’s natural circadian rhythm. We typically recommend multiple light sources including decorative and task lighting to allow the end users to control light for personal comfort. Window treatments are typically selected with the goal of preserving daylight to the greatest extent possible. 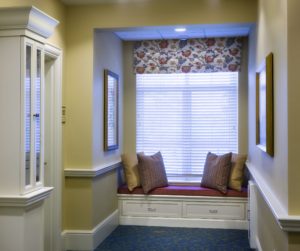 Research indicates that we not only prefer natural settings to man-made environments but also favor expansive views from a position of refuge. For interior spaces, this could be a cozy window seat tucked into a corner from which to view the outdoors, feel the sunlight streaming in or open the window to hear the sounds of nature and feel the wind. Creating a focal point, like a fireplace can help organize and define a space, connecting several little parts into a visual whole.

Another important consideration is connecting spaces with the bio-cultural context of their location, reinforcing a sense of place and connection – geographically, historically, ecologically, and culturally. In real terms, this translates to selecting materials, finishes and artwork that are relevant and unique to the location where the space exists. Other criteria include interior design strategies to encourage and aid people with navigating an environment through transitional spaces. The spaces in between such as corridors, thresholds and indoor-outdoor links such as porches or patios can help to subtly guide people through spaces. Similarly, culturally relevant designs promote a connection to place and the sense that a setting has a distinct identity.

The elements of evolved human-nature relationships, focus on the fundamental aspects of the inherent human relationship to nature. In the book Place Advantage, Dr. Sally Augustin surmises that years of evolution have developed our desire to surround ourselves with natural elements. She provides the examples of animals in the Serengeti seeking shelter of the trees to provide respite from the harsh heat and glare of the sun. Humans similarly tend to prefer spaces with dappled light, creating soft shadows rather than unfiltered, intense, artificial lighting. Effective biophilic design goes beyond our affinity to nature to also address how we engage with the world around us. According to Stephen Kellert, “Prospect and refuge, order and complexity, curiosity and enticement, change and metamorphisis, security and protection, mastery and control are all elements of a more complex relationship between humans and nature that reveal our evolutionary influences.”  Kellert further asserts that the effectiveness of biophilic design depends on interventions that are connected, complementary, and integrated within the overall environment.

For most of us, our love of nature is simply second nature. However, when we take a look at the research, we understand how important biophilic design truly is for our clients, our communities and ourselves.

Amy Kleinfelter, IIDA, LEED AP ID+C has 27 years of experience focusing on commercial interior design. A LEED Accredited Professional, Amy has a particular interest in biophelic design and the powerful benefits associated with effective nature connections. She particularly appreciates the biophilic design elements incorporated into our own workspaces.

The Economics of Biophelia:  Why Designing with Nature in Mind Makes Financial Sense, Terrapin Bright Green, 2014

What Is and Is Not Biophilic Design? Stephen Kellert, Metropolis, October 26, 2015